China Takes to the Skies

a review of The Wandering Earth 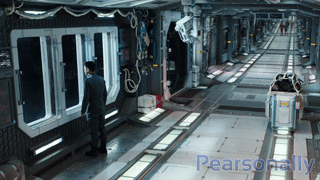 Viewing the end of humanity in The Wandering Earth.

Recently, Netflix released the Chinese blockbuster sci-fi epic The Wandering Earth (May 6, ’19). Having made over $700 million worldwide, the film made good bank on what has been called “China’s first full-scale interstellar spectacular”.1

As you would expect, it is a mixed bag, with moderate highs and usually unintentional lows. Science-wise the file is problematic, but epic in scale, heroic in scope.

One of the main problems is when the Earth — which is Wandering (duh) — is approaching Jupiter.  There is a sudden, unexpected burst of gravity from Jupiter, called here several times a gravity ‘spike’. This is absolute hogwash, and diminishes the suspension of disbelief in the plot. There is no such thing as a planet just bursting forth with a sudden pull of gravity. The laws of physics to not allow such a thing, and it has never been observed in nature. Planetary bodies simply do not just decide to increase their gravitational well.

The gravitation well is in fact so constant and reliable they are used to slingshot and speed up planetary probes on their way to explore far reaches of the solar system and beyond.

In the movies’ main scenario, good old Sol is expanding and will engulf the Earth in 100 years. No explanation for why is given, but if it’s the reason stars like ours actually do expand, it’s about 5 billion years too early.  The planetary crisis is given about as much coverage as the reason for the crop failures in Interstellar.  We just have to accept it and move on. 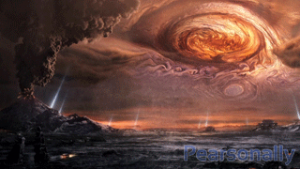 Will the pale blue dot be swallowed by behemoth Jupiter?

Humankind comes together and builds engines which are designed to push Earth into the orbit of our nearest neighboring star, Alpha/Proxima Centauri, a 2500 year journey.  Of course that is a dual-star system with its own planetary bodies, and how our humble rock would be able to navigate into its ‘Goldilocks Zone’2 is left to the imagination.

Either that, or I’m just too damn picky.

Artistically, the directing is part of this movie’s weakness. Though the ambitious scope is well defined; several aspects need to be pointed out. Maybe I’m just too retro-loving, however I did notice references and respectful borrowings from other sci-fi blockbusters, which may be either intentional or unintentional. Some of these classics include Alien, The Terminator (+ 2: Judgement Day), and 2001: A Space Odyssey; but mostly has very similar styles to Moon (2009 starring Sam Rockwell), and Gravity.

Problems in the direction and editing include purposefully handheld camerawork that is just too damn shaky. There are many confusing shot sequences, and too many quickly-cut shots which contribute nothing to the storytelling. Just because there’s a budget doesn’t mean the most mundane 4 second task being shown needs 6 cuts. Just fucking stop it. Study Hitchcock, Kubrick, Alfonso Cuaron, Speilberg and of course Eisenstein in the West; Farrah Khan, Ramesh Sippy, Ishirō Honda and of course Akira Kurosawa in the East. Sometimes a conservation of edits can tell more, put more import into and feed more meaning to a minor story point, giving the viewer a more stable, empathetic and empowering experience. 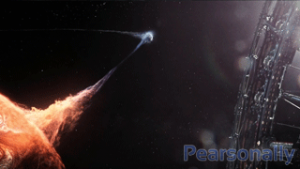 Tense moments for The Wandering Earth as humanity continues on to Alpha Centauri via Space Station IS.

Unfortunately, the direction in this film at time fails this basic idea. Tasha Robinson on The Verge wrote it so beautifully, I quote it here. She summarizes the “flashy action scenes without much substance, a marked bent toward sticky sentimentality, an insistently pushy score that demands emotional response from the audience at every given moment”3, as part of the ‘flaws’ she identifies in the movie.

On the more positive side, Robinson summarizes:

Where the film really stands out, though, is in its eye for grandiose spectacle. Director Frant Gwo gives the film a surprising stateliness, especially in the scenes of the mobile Earth wandering the cosmos, wreathed in tiny blue jets that leave eerie space-contrails behind. His attention to detail is marvelous — in scenes where characters stand on Earth’s surface, contemplating Jupiter’s malicious beauty, the swirling colors of the Great Red Spot are clearly visible in reflections in their suit helmets.4

In this, I will agree some of this films’ sci-fi mind-bending visuals stand out (a few of which I have as images within this post). Some of the set and sci-fi visual designs are impressive, as is most of the acting.  For this viewing I chose (though I do so rarely) to view the movie with both subtitles and (poor) audio dubbing into English.  Soon I may again see it with the subtitles only, allowing the Mandarin voices to be heard.

Though I have read now dozens of discussions on this epic, Robinson’s take is so good, I want to quote her again:

…frequently breathless, though the action occasionally gets a little muddled in editing. At times, particularly on the surface scenes where everyone is wearing identical pressure suits, it can be easy to lose track of which character is where. It’s often easy to feel that Gwo cares more about the collective rescue project than about any individual character — potentially a value that will work better for Chinese audiences than American viewers, who are looking for a single standout hero to root for.5 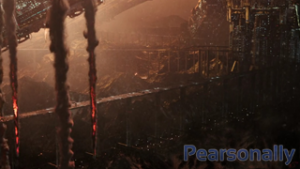 The big themes of self sacrifice and the overwrought last ditch efforts to save humanity are just a bit overblown. And at every step the most improbable micro-crisis must get in the way of the action. A character has to go into another room to pull a plug and restart a reactor? Of course the sliding door malfunctions and another micro-crisis ensues.  This is the story for most of the story, and it’s tiring.

All is not horrible, however, despite my negative nattering. It is a grand, epic sci-fi superflick, with well handled themes, a slightly believable story, and a very visual hold on the decent tale being told.

Decent is my call on this, and a must for die-hard sci-fi fans.  I’ll give it 5.5 out of 10 stars, simply because the scientific holes are unforgivable.  But if the plot details don’t grab hold of you, and you want to see a challenging, smart flick, watch Snowpiercer instead, also currently on Netflix.