a review of Us 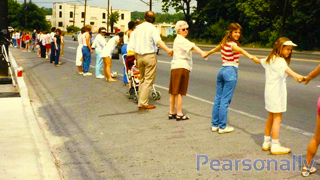 Us (2019) is the 2nd major film from 5 season “Mad TV” comedic actor Jordan Peele.   After the maddening demise of that beloved variety show, he collaborated with (Detroit’s own) Keegan-Michael Key on the Comedy Central sketch series “Key & Peele” (2012-15).  His breakout “black horror film” Get Out (2017) is only the 2nd horror film to win the Oscar for Best Picture.

He could rest on his laurels, but that just wouldn’t be the route of a talented and maybe even brilliant filmmaker in the tradition of his heroes, including Rod Serling, Alfred Hitchcock and Stanley Kubrick.  This 2nd film thankfully falls out of line with the latest Hollywood cookie-cutter factory baked and sugared treat which is also either a 1) sequel, 2) prequel, 3) equal, 4) remake, 5) tie-in to an existing franchise, 6) tie-in to a newly-constructed artificial franchise or 7) popular book tie-in.

And we should be happy for it.

As interesting and weird as Get Out was, Us is even weirder, a bit more horrifying (a pleasurable form of terror, not schlocky or disgusting; borderline psychological) and every bit as fun.  Better?  I think so, but certainly as original, despite one seemingly improbable sub-plot necessary for the story arc.

There was one interesting clue in the beginning of the story which I completely missed, which — if I had caught it — should have made me more aware of what was really happening when Lupita Nyong’o’s adult psychological persona visits her for the purpose of terrorization and murder.  Not only was it handled so well as to show Peele’s control of subtlety; it shows even the younger actress, Madison Curry, playing Nyong’o’s 9 year old self, is also perfectly cast, talented and sublime. 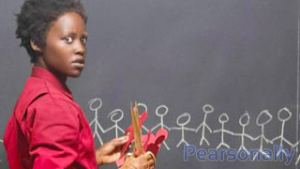 Although the future looks bright for Peele, I do have a worry.  Just a quick overview of his Wikipedia page for upcoming projects looks like he may stretch things too thinly.  Having SO many projects in the works means he can only devote an increasingly smaller amount of time to each.

Yet my biggest upcoming disappointment comes through even though one of his latest projects hasn’t even been released yet.  Tomorrow — April 1, 2019 — CBS All Access (yes, they want you to pay now, and won’t release on existing platforms, a bone of contention covered here) releases the latest reboot of Serling’s “The Twilight Zone”, and I already see trouble.  There have already been 2 attempts at rebooting the show, and I’m happy Peele is involved intimately with this one.  But one of the episodes being released tomorrow is called “Nightmare at 30,000 Feet”.   If this sounds familiar, that’s because it’s 10,000 feet higher than one of the most popular episodes of the original series, “Nightmare at 20,000 Feet”, originally starring William Shatner perfectly cast as the only passenger on an airplane passing through a storm who notices a gremlin pulling the engine apart.  The episode was already re-made, also well cast this time with John Lithgow as the aviatophobic flyer in The Twilight Zone: The Movie (1986).

And yet the fact that it’s being re-re-made is part of my worry about a slow, wandering slip towards possible mediocrity and disappointment in Jordan Peele’s advance toward cinematic loftiness.  If he can continue to maintain his attention to detail, further honing his craft, his name will eventually be up there with the masters of the cinematic craft who helped guide him inextricably toward his love of horror.

After seeing Us, somehow, I think my worries are unjustified.