a review of Captain Marvel 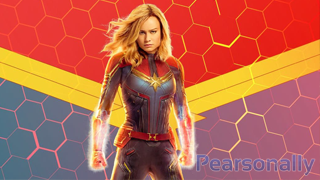 Think of a comedian. The material is fair, but brought down a few notches by the delivery. Several of the comedian’s jokes are colorless, lifeless, even shockingly lame.  Let’s not even discuss having more gaps in logic and continuity than the Old Testament.

Welcome to Captain Marvel, the latest contribution to the MCU, the Marvel Comic Universe. While still not nearly as bad as the first Iron Man, CM – first of all – has one of the great hallmarks of origin stories, asking us to invest our sympathy, even empathy, in the onscreen action. While our immersion does reward the viewer to some extent late in the film, the first hour is scrappy.  Even a bit crappy.

This is very surprising since there have been SO many incredibly potent movies from the MCU as of late.  Let’s not forget the incredible Black Panther was even nominated for an fucking Academy Award (yes, a freakin’ Oscar!) for Best Picture.  <<< MIND BLOWN >>>  And that not only was Panther the biggest money making movie for 2018, Avengers: Infinity War was 2nd, Deadpool 2 was 5th, Ant Man and the Wasp was 8th, and Venom was 10th.  All Marvel films.  And while to me Avengers:IW was incredible, the fact that so many of the MCU films have been both critical and commercial successes, we have to ask ourselves WTF happened with CM?  Lindsey Bahr of the Associated Press wrote:

I spent over 2 hours with Captain Marvel/Carol Danvers and I still have no idea what her personality is. Sure, there’s a lot more going on in Captain Marvel, but it’s a pretty egregious failing considering the creative bigwigs at Marvel had 10 years and 20 films to work it out.

Hopefully The Academy will recognize that CM doesn’t deserve any awards for Script Continuity (the fact there is no such award helps).  Samuel L. Jackson’s character Fury has reason to evade the SHIELD agents at one point (in the ultimate spoon-fed plot point).  They are in a deep underground bunker’s cavernous library, with long ceiling-high aisles of shelves stacked in a linear, almost Mondrian arrangement.  Several agents slither through the stacks, and are even easily distracted by Fury throwing something so he could slip away.  But — no shock here — Fury’s turncoat boss is waiting for him in the knave, and a fight ensues.  The other agents, while still being in the same room, the very same agents whom we just saw scatter seconds ago, are nowhere to be found to help their boss against Fury.  They would easily hear Fury and his boss scuffle, but it’s like they disappeared into the fucking void.

Several other stinkers make me simply sick.  Mainly, the 1994 (when the movie is set) communications technology works perfectly while deep in the underground bunker as well as my 2019 cell phone does living 1km from a cell tower today.  Anyone who has the faintest knowledge of non-proprietary technology c. 1994 will call out this utter improbability.  From the same deep bunker, CM herself steals a super cool jet, and flies it to Louisiana.  But apparently this multi-billion dollar state of the art aircraft — which is more technically advanced than anything yet revealed to the world — doesn’t have any locator mechanism, and they’re not worried out it being found.  I simply do not accept it.

How about switching gears?  CM is, from the beginning, unconvincingly unoriginal in its plot turns.  A major twist revealed nearly ½ through, is actually revealed lazily from the beginning in a form of onscreen forward and reverse of a VHS tape, which is meant to tell us just enough to get us interested in intersecting timelines, but tell us almost everything we need to know that when the movie does finally get started, we know we are seeing a sham origin.

There is a story of the name.  On the planet where her superpowers are trained for controlling interests of the aliens who (we figure out early) kidnapped her, she is named “Vers”.  That’s because her dog tag (somehow, without her being killed) gets split in half, leaving off “Carol Dan”, leaving “vers”.  The kidnapping aliens find one dog tag, the other is in the collection of her best friend.  When Carol Danvers reclaims her name, she doesn’t even call out her complete name!  I moaned.  Loudly.

Fuck, I think I actually hate parts of this film.

I am glad Sam Jackson has a very large and continuous part here, having almost as many screen minutes as our lame hero (lame, but well acted, despite the lame online comments about her not smiling enough.  BFD, if you were in the situation her character was in, you wouldn’t be a Merry Prankster either).

I find CM simply lame/lazy in its execution, novice in directing and photography, a big-budget maelstrom.  However, if you are familiar with the Tesseract from the Captain America and other MCU films, there is at least one link to the rest of our beloved cinematic corpus.

I don’t know who or what to blame. Some of the writing is lame, certainly.  But, visually, the directing is even more so, making me wonder why two people share the credit.  A quick look at the directing duos’ Wikepedia page gave me an idea of where the onscreen lack of depth may have its origins.

All is not hopeless, however. If anything good can be said, I must tell you that I loved the cat.