THIS REVIEW IS IN THE WORKS 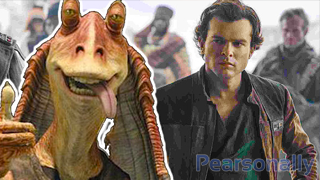 In the modern day trade of blood diamonds, human cargo, forced servitude, kidnappings for shackled dungeon sex bondage, and with the rise of authoritarian right-wing totalitarianism, it’s not at all refreshing to know these attributes are evident in a galaxy far, far away and a long time ago.  Well, honestly some of these things are not touched upon in Solo: A Star Wars Story, but you get the idea. This is the world shady young galactic hustler Han Solo has to navigate, find his way through, and build his business and reputation. And where each turn can be your last, where you can be sold off like stolen chattel on any occasion … well, we already know what Earth is like, so you get the idea.

This is the Substitutes plentiful action for anything approaching depth.

Similar to parts of, and especially the last moment of the most recent installment in the actual Star Wars Trilogy of trilogies, The Last Jedi, this out-stallment (I just made up a word) touches upon just how damn hard it is to get your hustle on out there in the galaxy. Similar to today’s America, the without continue to be without, the haves strengthen their iron grip on their fortunes, where the middle class becomes manipulated into serving the needs of those without the best interests of the middle class  in mind. Of course this is similar to the Trumpian/Randian vision of Fuckublican Con men.

This is the world Solo is set in, and the plot is simple enough:  through much of the movie, Han works to get the score he needs to get back to his home planet and rescue the love of his life.

So, the questions we have are: Does it squander the believable background world of its setting?; Does it substitute action for depth?; Does it try so hard that it’s flawed?; Does it show that the movie had 4 directors?; Does it pay proper homage to the Star Wars galaxy?

There are what we can call throwbacks. For instance some of the sounds the Millennium Falcon makes can be now traced to the inclusion in it’s mental architecture a piece from Lando’s much-loved robot assistant.  And one shootout is unsurprisingly very similar to the Rescue of Princess Leia in A New Hope, the original and first released Star Wars movie.  During one of the Millennium Falcons’ escapes, through a cloud of Darkness, it breaks through into an asteroid field, and immediately the rousing symphonic score of the exiting asteroid belt chase in The Empire Strikes Back is recalled, nauseatingly. These three throwbacks and especially the last mentioned one, are juvenile.

They are, one and all, poorly executed. So they are reflections of events that we’ve already seen, but are yet which have yet to happen. That just makes no f****** sense.  I CRINGE when I think of just how fucking stupid and manipulative that is.  Bleh.

Still, there is a bit to like. The struggles and the sheer harshness of life resonate in today’s time, and could have easily been set in modern America, an anti-union, anti anything good Congress rules the good, just and peaceful world some of us have been trying so hard to create.

Alden Ehrenreich, playing Young Han Solo, is a good actor, as his performance on. Show. Several other cast members are also outstanding

Although there are several decent plot twists, one major twist could be seen coming from at least an hour before.

THIS REVIEW IS IN THE WORKS