Leave Your L.O.C. (Letter of Comment) About Microzine 7 For Microzine 8  ||  Contact Editor/Publisher of Microzine for Any Other Reason  ||  I Want to Contribute Art/Article/Story for Future Issues of Microzine  ||  Purchase A Hard Copy of Microzine 7 or a .PDF  || 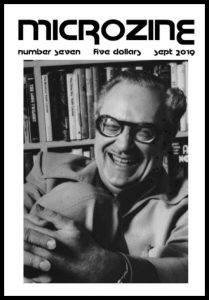 So, why am I doing ‘Microzine‘ 7? The reasons exceed the number of arms in a family of Jatravartids. Partially and particularly, it’s about keeping promises, even though the person I promised passed from the living 11 years ago.

Scratch the record.  Let me explain.

It is April of 1978. I just turned 13, and thought I was the world’s biggest sci-fi fan. Posters of schlocky movies adorned the walls of my office/bedroom, well over 100 dog-eared sci-fi paperbacks lined up what little shelving space I had at the time or lay stacked on the floor, and my sci-fi hardcovers were in boxes under my bed with issues of my favorite magazine at the time, ‘Starlog’ stuffed between like packing material. 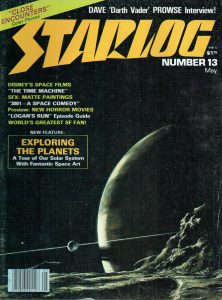 The May, 1978 issue of ‘Starlog’ arrived in my hands (monthly mags were always released a month early), and imagine my dismay when I saw the bold claim on the cover: THE WORLD’S GREATEST SF FAN!

I slyly humored to myself along the line of “Gee, I don’t remember interviewing with ‘Starlog’.” So I opened the issue, read the letters, early features, and I think it was the next day I opened that issue to the spread shown below, and — yes — I admitted THAT guy is a bigger fan of science fiction/fantasy/horror than I. Imagine the person who invented the very term “sci-fi”. Imagine the first “futuristicostume” — nowadays ‘cosplay’ — worn at the first sci-fi con, the editor of the first fanzine, the highest-paid author of a sci-fi story, a literary agent to some of the biggest names of the genre (including Ray Bradbury, Isaac Asimov, A.E. Van Vogt, Curt Siodmak, and L. Ron Hubbard), winner of the first Hugo Award, the best-known collector, archivist and activist for the genre, small part and cameo actor in dozens of movies and tv shows, neologist and Esperantist.  Not only was he the world’s greatest sci-fi fan, he was instrumental in expanding and pushing forward the genre as a whole, making it more accessible and proliferate.

Inspired by his story, I thought about doing my own sf fanzine, but it was not yet to be.  Then, while walking through a small bookstore in central Ohio, after going with my mom and her boyfriend to a business meeting, I discovered an odd fanzine called ‘Future Focus’, issue no. 9, edited by a guy named Roger Reynolds.  I devoured the mag and became more excited to do something similar.  But I was not a good writer, I didn’t have much in the way of artistry, so what was I gonna do?

Here we move to late ’79.  It was in the first few days of high school, standing at the bus stop at Vernor and Central, awaiting the Baker Bullet outbound for my return ride home.  Here, someone saw me reading ‘Starlog’, and said “Hey, I have that, too”, and pulled out his copy.  That guy was Kevin Colbeck, whom I became a fellow geekazoid with, while we both devoured media, discussed movies seen, books and magazines read, and I shared my love of all things Forry.  It was within weeks, I recall, that we decided we would do a fanzine.

Between our pals in school, we had just several entries, including some cartoons, themed artwork, my ongoing introduction column “Comments & Meanderings” (of which this is an installment for #7) and several movie and book reviews.

Getting the formatting was a challenge, but I will have to leave that for another time.

During this time I was becoming very involved in the SF fandom scene, going to cons and sending letters to other publications.  I met Roger Reynolds, editor of the aforementioned ‘Future Focus’, and he said at a convention in Ann Arbor that my early fanzine — I only had 2 issues out at this time — was better than his.  I conveyed my doubt, stating how good issue # 9 was.  He said his first few issues weren’t even copied 2 sided while mine was!  However that may be, I was happy at my minor achievement.

Over the next few years, most of the original people involved fell off, and I ended up depending mostly on the talents and tales of two friends I had gathered in my sphere, Ray L. Heikes and Charles A. Oliver.  Ray was a talented artist who did the cover of issues 3 and 5, while Charles could put pen to paper.  His writing was lucid and inventive, and I have wondered many times since why he hadn’t earned a Hugo Award.

They dragged me, kicking and screaming, from putting out a crudzine to putting out a reputable  instrument of fandom, warts and all.  And in I believe ’80 or ’81, a local convention was hosting my hero, Forry, as one of the guests of honor.  Meeting him was an honor.  I got his autograph and though he had a plethora of knowledge to depart; but I was also able to entertain him.

Quick story.  On a show called ‘PM Magazine’ was a 6-minute segment about Forry, his Ackermansion, his career and massive collection.  Having recorded it on an old cassette recorder, I listened to the segment often enough to have been able to, without cheats, regale him with the entire episode.  Other 4E hangers-on sat and stood in a circle around him, giving me a mini-amphitheatre in the convention’s hotel suite to play out my recitation.  I got a small ovation, and 4E, always quick with a witty response, said something along the line of “Better than the first time I saw it.”

In ’82, my mom and I traveled I-94 to Chicago, where I attended my first WorldCon, Chicon IV, where Forry, when I finally caught up to him, showed me that he remembered my name.  Impressive.

We kept in touch, and in ’84 I journeyed to Hollyweird/Horrorwood, Karloffornia and visited the Ackermansion, which for me was a heart-racing dream come true, heaven on earth, journey of a lifetime.  On my first night in the City of Angels I stayed at the Ramada Inn Hollywood on Vermont.  Standing on the balcony of my room, I drew in the cooling breeze of a perfect 72 degree dry night, and decided I would move to LA.  Unfortunately, that never happened.  But another time for that.

The next morning I had to move to the TravelLodge on Vermont, and once I got checked in, I decided to walk up Vermont to Forry’s house.  It was a long walk, but I wanted to save money, plus I have always liked just walking and biking instead of taking a bus, so I put one foot in front of the other for a long walk which probably took nearly an hour.  Little did I know at the time I would be passing the otherwise mundane intersection of Vermont and Franklin, which would later be named the Forrest J Ackerman Square.  Once I reached the Ackermansion, I rang the side bell and heard “Who dares disturb the sleep of the vampire?  Enter at your own risk!”  A few moments later, Forry himself came to the side gate and allowed me in to the most incredible home I could have ever imagined, the center of my sci-fi universe, the Ackermansion.

He gave me a brief show of the main level, cramped to each inch with some sort of sci-fi memorabilia, collectible, literature or original painting.  He took about 10 minutes and showed me several specific things, then sat down at one of his desks to work, allowing me a while to wander about, jaw agape at the numerous wonders inside.

MORE BRILLIANCE TO COME, PLEASE CHECK BACK SOON FOR THE EXCITING CONTINUATION OF THIS STORY 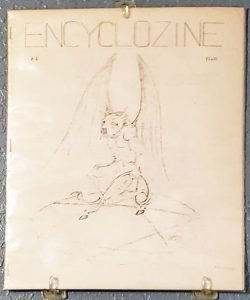 The original name of the project was Encyclozine. A fellow fan I hung around at that time chortled at the name, saying something like “Sounds like a lot of information involved, like encyclopedia, but it’s too damn small!” 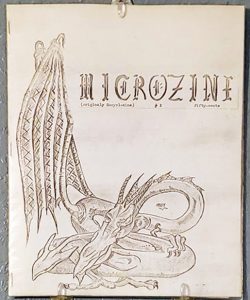 We quickly changed the name to Microzine, given by the same pal who complained about the original name.  I showed the first two issues to Roger Reynolds, editor of a fanzine influential to me called “Future Focus”, and he said my first 2 issues were better than his.  I argued that seemed impossible, considering how good his #9 was, and he said his were only single-sided.  It was a boost to my ego, however small. 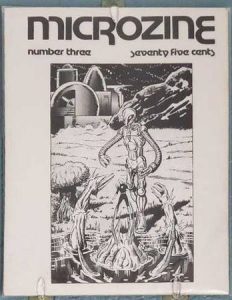 Arguably the best issue, I changed the format to fit the name and began copying the masters onto 8.5″ x 14″ legal paper folded in half, stacked on top of each other and stapled together.  With the super-duper help of my friends Charles A. Oliver and Ray L. Heikes (both of whom I have tried, over 2 decades later to contact to no avail (finding Heikes having died)), they helped me improve the cover, using transfer lettering and allowing me to use one of Ray’s excellent illustrations and Charles’ brilliant story.

Also includes an illustrated poem by Meri McGhan, “The Return of the Ghostdancers” by Kevin Colbeck, a twisted story by Charles A. Oliver, a tribute to Harlan Ellison, comics, book and movie reviews. 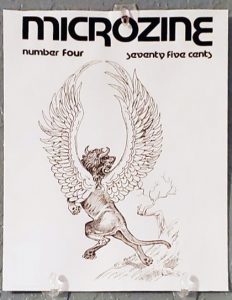 This issue included an essay by David Gerald. 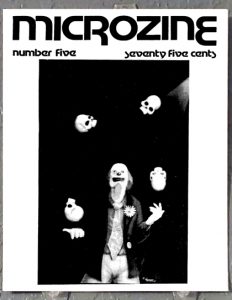 description in the works