The Bad Physics of Ad Astra

a review of Ad Astra

MULTIPLE SPOILERS AHEAD, IF YOU CARE TO SEE A TRUE STINKER 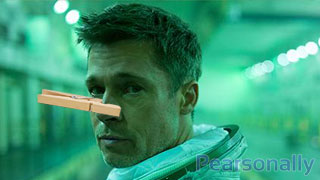 When Brad Pitt’s newest sci-fi flick was forthcoming, it looked chock full of promise: an intriguing plot, Tommy Lee Jones as the long lost father, beautiful photography and special effects, and the trailers didn’t give away too much of the story, just enough to keep it interesting.

In it’s attempt to be a legacy film, Ad Astra takes/steals/borrows straight plot points and even imitates shots from legendary entries in the sci-fi cinema corpus, most notably 2001: A Space Odyssey, Interstellar, Gravity and others.  That’s not for a lack of originality, of which the film fares well, but us dyed in the wool film-freaks recognize and can appreciate a good reference or throwback.

Despite expectations, the plot is simply lackluster, with an ending that leaves you wondering “Why”?  As in “Why, after 2 hours, do I not feel satisfied?” and “Why do I feel like those 2 hours didn’t give me enough depth and/or breadth to like it?”That’s simply my subjective opinion.  There are more important, objective problems with the movie to point out, and they all revolve (planetary pun) around bad physics and shitty science.

Oh, where does one begin?

As the movie begins, Brad Pitt’s character, Major Roy McBride, is working on a giant space antenna anchored in Terra firma.  It’s so tall it reaches into the exosphere.  This is credible and believable, with physics worked out by Arthur C. Clarke in the 1950s.  Such a structure is possible, although the given reason for such a beast, the detection of alien life, is questionable.  The resources required for a single radio telescope to spin around the globe in an attempt to detect alien signals seems better spent on a resource which is stationary and actually out in space.

While he is working on the antenna, a large flash of light from above — apparently high energy charged particles or something similar, we never do know — harms components which explode, and falling debris causes him to loose his grip. He free falls to Earth, saved by his parachute.  We learn these energy bursts come from the area of Neptune and gets stronger as it approaches Earth.  That is simply BS on several fronts.

I have reproduced what I saw in the movie during the explanation of why our hero has to go to Neptune (Illustration 1).  What the general explains to Brad is that the destructive (we are given a death toll of > 40,000 for the recent blast) rays come from Neptune and get stronger as they get closer to us.  First, the idea that any form of these bursts, from cosmic rays to radiation to anything produced by “antimatter” (which itself has tons of problems in reality) gets stronger as they get to Earth and fade away shortly thereafter.  THAT IS STRAIGHT UP BULLSHIT.

Illustration 1. By memory reproduction from the movie. Yeah, right.

Consider, first, that the rotation of Earth and Neptune are completely different in terms of the time they take, and their distance from each other is constantly changing.  When Neptune is at perigee to Earth, the distance is 4.3 billion km (2.7 billion miles), yet when Sol is between them, that distance can stretch to 4.7 billion km (nearly 3 billion miles) at apogee.  To put these distances in perspective, since Neptune was discovered in 1846, only one Neptunian year has passed, not because of the rate of speed at which it orbits, but because of the vast distances involved in its long sweep around the sun.  Yet according to the graphic and the verbiage, these rays hit Earth.  That means there must be aim involved, guidance and intent.

So after a few small semi-believable mini-adventures, Roy gets to the lone space station orbiting around Neptune, where his dear old daddy states he’s been trying to stop the reactions, and has spent the better part of 16 or so years trying to stop some failed antimatter experiment from continuing.  I guess either turning the vessel AWAY from Earth, or even disconnecting the power from the sparkling appendage on which the antimatter experiment is sparking away in continuous malfunction, never occurred to him.  Such brilliant minds don’t make such easily correctable mistakes.

Also, Neptune is a giant planet.  Nearly 58 Earths could fit into it, so the gravity well must be comparatively incredible, and any medium sized space station orbiting it would have to be going fast enough in its orbit around the planet — or be orbiting at quite a distance — to not get pulled in.  Yet not only does it seem to be in a geosynchronous orbit, but is close, near the inside of the inner rings, in fact.  Now I will admit I don’t know the numbers, and if I did know the numbers, my dyscalculia determines that I wouldn’t be able to calculate what I am saying, but I bet Neal deGrasse Tyson a bottle of highland scotch that I am correct!  Daddy’s space station is simply portrayed too damn close to the planet.

Since Neptune also orbits on it’s own axis, I also want to know what happens when the eruption of energy from the antimatter experiment occurs while the station is on the dark side of the planet.  Where does the energy go then?  There are so many stinkers by the end of the show, my nose felt covered with a think layer of rancid feces.

Throughout sci-fi cinema, from Outland to Sunshine, another common trope is decompression, loosing the 1 atmosphere pressure against the body which helps hold it together and the 0 atmosphere decompression of outer space.  Ad Astra continues the myth of the exploding body in this situation, but it is nothing but a myth.  The awesome animated film Titan A E gets it right, as someone about to loose pressure is informed to temporarily exhale before the glass on the cockpit cracks, giving him enough time to get to a pressure environment.  What actually would happen is an embolism, though it would be lessened in the Titan A E suggestion to exhale instead of instinctively inhale.

There is one instance of people exploding when decompression — far more extreme than that shown in movies — tears apart the body.  An undersea pressure of 9 atmospheres “immediately” killed 4 people and seriously injured others.  But that was 9 atmospheres, not 1.  Read all the bloody details here: https://en.wikipedia.org/wiki/Byford_Dolphin#Diving_bell_accident

There is also a fundamental misunderstanding of what the heliosphere is in this un-scientific fiction.  During descriptions of the far-flung “Lima Project”, it is mentioned the antimatter experiments will be conducted at the edge of the heliosphere, far from the influence of the sun’s magnetic field.  Antimatter experiments and their extremely rare production of volatile antimatter are done here on Earth without problems from the much much much greater influence of the sun’s magnetic field.  First, the production of antimatter is not hampered by solar magnetism.  Second, the whole statement collapses as soon as we realize Neptune is well inside the bubble of the heliosphere, which relates to the pressure of the solar wind, and doesn’t even begin until a distance from the sun roughly 2 times the distance Neptune is from the sun.

There’s also the matter of what I might consider over-borrowing.  When Pitt’s character reaches Mars, he must send a covert laser signal (whatevs) to the “Lima Project”, where daddy is apparently alone, and most likely still alive.  The man who meets him is a Matthew  McConaughey look-alike.   McConaughey was, of course, in Christopher Nolan’s (much superior) recent sci-fi epic Interstellar.  In Ad Astra, the moonbase is in Tycho crater, where the Tycho Magnetic Anomaly One, a.k.a. Monolith, is found in 2001: A Space Odyssey.  In the ’70s British sci-fi series ‘Space: 1999’, Moonbase Alpha is located in the very same Tycho crater.  When there is a flashback to Brad pulling the memory of the decades of research from his dad’s legacy, the shot is directly stolen from Bowman disabling Hal in 2001. 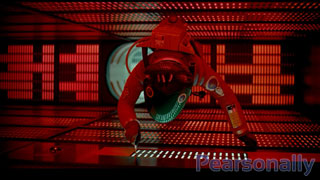 Shot from 2001 reproduced with only minor variability in Ad Astra

There are several other stinkers as well, such as Pitt using an atomic explosion to help propel his craft back to Earth from Neptune.  Yeah, except one of the rings of Neptune, consisting of triillions of chunks of ice and rock fragments, is directly in the way, and would destroy the craft before it had a chance to gain speed.

Damn, I just cannot get away from how much this movie pissed me off, so to save my blood pressure, I’ll stop.

If you want escapism, you can’t find a more beautifully shot film, with some short action sequences, decent character motivations, some social comment, and overall fine acting.  Just don’t expect greatness.  Don’t expect anything mind-blowing, and certainly you should not expect Ad Astra to be listed among the classics.

But regarding the abundance of un-scientific details, I have one question: where’s the clothespin for my nose?