Ready To Ignore One

a review of Ready Player One

WARNING: SPOILERS AHEAD, BUT SINCE I’M RECOMMENDING YOU AVOID THIS TRAINWRECK IT DOESN’T MATTER 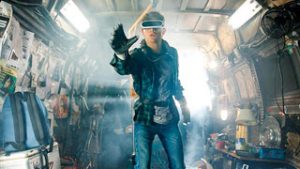 Legendary motion picture virtuoso Stephen Spielberg stated in a featurette1 his motivation for making his latest movie: “When I read Ready Player One I was completely wowed by it.  I suddenly saw a future and it wasn’t that far away from what I think is going to happen.”

What ends up happening is that almost anyone and everyone is hooked up w/ VR headsets to “The Oasis”, which is an immersive computer simulation game with m/billions of users and nearly endless possibilities.  Someone please let me know the day that stock hits the market.  I am always willing to make money on lazy people’s mindless escapism.

Of which Ready Player One is a perfect example.

I am still undecided on whether this bubblegum flick is an expected Spielberg outing.  On the one hand, his War of the Worlds (2005) is even worse, however where it is vapid and hollow, RPO is over-bloated and tedious, engaging it’s main weaknesses in an attempt to distract from the predictable and childishly simple plot.  There is no Close Encounters or Saving Private Ryan here, where visual and expository genius give you all you need to know to be hooked into the characters and story; here you get a narrative voice-over equally annoying to the one in the original release of Blade Runner.

Compared to his likable and near-brilliant Duel (1971), which delivers its goods in agonizingly — yet super compelling — tiny bites stretched into 90 minutes of calm mayhem (see the movie–you’ll understand ‘calm mayhem’), RPO shows its goods up front, blows its load with its pants on, and the ride afterward is at least an hour long post-coital attempt at slumber with your eyelids glued open.  You’ve had enough already, but feel obligated to watch everything you already know will happen.

Referencing the (Distant) Past

Agonizingly, the profusion of allusions to pop-culture is one of the few aspects to make most viewers focus their gaze.  For those of us who consumed movies, television and even comics and magazines from roughly the late 1970s to the early 20naughts, we will get most of the references.   A few references go as far back as Forbidden Planet (1957).  There’s a list here2.  The main problem, however, is two-fold.

First: I entirely agree with Alex Nichols’ assessment in The Outline,3. While similarly lamenting the movie, he considers it with the moniker “authorial narcissism”,4 one of those “I weep for the future” groans which display its me-generation one-sidedness.  A perfect fit for the short attention span Trump era.

The writing process appears to have begun with the question: What if the entire world revolved around me, and the specific video games and movies I like? The rest was assembled around that essential core. Cline [the book’s author] is far from the first author to write a self-insert wish fulfillment narrative, but he may be the first to write one this lazy and self-indulgent. To place oneself in the character of Wade Watts, an 18-year-old video game trivia knower, requires no imagined heroism or personal growth. It simply constructs a world around the reader, where his comfort zone, his passively acquired knowledge of retro video games and Star Wars, is enough to effortlessly make him a Great Man of History. A fantasy this mundane is barely a fantasy at all — just a desire to be unjustly rewarded for mediocrity. And, thanks to Steven Spielberg, Cline’s mediocrity has been rewarded beyond his wildest dreams.

Second: and here’s one I have yet to see referenced elsewhere — is the shifted timeline of the references.  The book arrived in 2011.  The book and film both reference the popular online video game Minecraft, though in 2011 it was only in a sandbox version, not yet the global phenomenon it is in this day.  Overwatch was released in 2016, so with the movie’s 2018 release may be the most current reference to a known pop-cultural item — in this case another of the multiple video games and vid characters screeching across the screen searching for their 15 nanoseconds of re-fame.

So from the early to mid 1970s, with exceptions, to the time between the release of the book to the release of the film, all of the references are, predictably in the past.  Distant past.  Since the film is set in 2045, why are there no made-up references in the years between, 27 years to use the film’s timeline generously, but for the book, a full 34 years with no characters, toy models, robots, spaceships, TV shows, movies, books, politicians or world events referenced in this slightest.  The lead character wasn’t even born until years after the latest pop reference used.

The over-reliance on references is not the only weakness here, but certainly the most compelling major problem.  So many simultaneous items vie for our attention through nearly 1/3 of the movie that it is difficult to keep a keen focus on anything individually.  The book (which I have not read) is similarly chided or beloved for its rabbit hole deep dive into cultural references.  The Verge5 has an interesting, if unconvincing, argument on why the film one-ups the book, and notes:

The film version of Ready Player One has some major advantages over the book. The exposition is just as bald, but once it’s done, Spielberg can focus on the endless dynamism of a world where anything is possible. As Wade [the young lead character] and others follow their quest through races, battles, and puzzles, they encounter a dizzying blur of visual references that act as “Hey, remember this?” in-jokes with the audience, including some major ones that weren’t in the book. But the filmmakers also delve into Halliday’s [the creator of The Oasis which the world has plugged into] past and his wounded psyche, in a way that gradually becomes a little touching and tragic.

This last touch is nearly the saving grace.  I, as a shy and inward wallflower, am  sympathetic to the game’s creator, whose life swung on the unstable hing of his awkward shyness.  Not having the cajoles to ask the pretty girl out, the spinster inherits his billion$ to the first player to unlock 3 golden keys he cleverly designed within the game.  The reason this is not part of the saving grace is predictability inherent in the movie.  If you can see the foggy windscreen while driving through the rain, you can see with sickening foresight nearly every childish twist and turn.

For the proliferation of these icons and allusions, RPO may be your cup of tea, though a true standard-bearer of style over substance.

The film review aggregate site RottenTomatoes.com gives the film a 78% for the audience score, out of > 22k reviews, while the Approved Tomatometer Critics give it a 72%.  Really?  That high?  I would disagree, and I’m a superfreak sci-fi fan in his mid-50s who has shaken George Lucas’ hand and slept in the Ackermansion multiple times, published his own fanzine and owns enough genre lit to satisfy the most pious Säuberung.

Yet to me this film was as empty as your local Sears.  The reliance on “oh, I know what that is . . ” is not enough go make a good story, or especially good cinema.  As Nichols further notes:

Although I have relied here heavily on Alex Nichols’ critique, I think he nailed it.  Click the link to the article for a series of great insights.  He sees this movie not only as a sign of the times, but as a cinematic vision of the future .

And we both weep for it.