The Force Has Awakened

Yes, Everything Old Is New Again

WARNING: SPOILERS AHEAD, BUT I PROMISE NOT TOO, TOO MANY 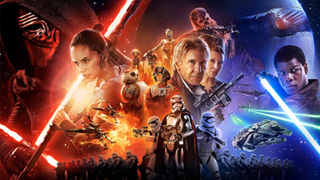 I am proud to say many things regarding my moderately-immersive involvement in the universe known as Star Wars (although ‘galaxy’ would be more retentively accurate).

My involvement as a Warsian slash ForceJunkie slash StarWoid has once again made me carve my schedule around the opening day of a motion picture. This time, at least, I wasn’t so embarrassingly disappointed as with the last 3 in this series released (although I still sorta like Clones).

Since we are dealing with 7 movies here, each of which have a Kubrickian naming convention, we can use the following key:

When I Write  I Mean

The first fear from fans such as myself held was the possibility of a return to the artificial (and I don’t mean that in the Pope Gregory II to Michelangelo connotation) and forced (pun intended) feel of the previous 3 releases. Since Disney was in charge, putting J.J. Abrams at the helm, telling Lucas “thanks but no thanks” on story ideas, and co-scripting with Lawrence Kasdan, all turned out to be audacious and sensible maneuvers. Smooth moves, Ex-Lax.

And yes, in a way – as stated by Filup Molina and Ted Marsdan of the New Rockstars[iii] channel on YouTube – “everything old is new again”. And so it is with Ep7. That carries some slightly unfortunate baggage, but in the light of a business decision, is business smart. Being over 30 years since viewing the last-occurring happenings in the Star Wars universe (did it again, ‘galaxy’), we have to consider the monolith and the foundation: The films themselves are the monolith, however the boundless merchandising and spin-off opportunities are the foundation; soft and hard merchandise, the media partnerships, co-sponsorings, fund-raisers, product placements, and cooperative offerings. 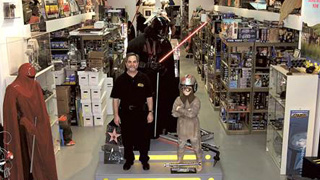 Supercollector Steve Sansweet, is the Director of Content Management at Lucasfilm. He’s either one to thank or blame. From Today.com https://www.today.com/id/37788526/ns/today-today_entertainment/t/star-wars-merchandise-beyond-childs-play/#.VnuoZ8so6os ©2015 NBC Television.

Lemme see how many products I can type in 30 seconds. Go. Watches (I own two), t-shirts, posters, action figures (of which there are several types of incarnations), toys (most likely the largest subgroup), comics, books, comic books, magazines, articles for existing publications, games, lunchboxes, trading cards . . .

And that’s just how many I could think of and type – with arthritis – in 30 seconds. I forgot to mention even Build-A-Bear Workshop® has a line of cute and cuddly sickeningly plush figurines. I must admit the Mini Ewok is unbearably adorable (again, pun intended), however the Kylo Ren furry is downright banal.

and waffle makers. To name a few.

So back to Disney, business, and Ep7.

These competing interests can be seen as having put the architects of this flick into a corner. It must, by necessity, have appeal – to maximize outcomes – to the rising multitudes 2 generations past the previously-occurring events, namely the destruction of the 2nd Death Star and the demise of Vader in Ep6. So although too much baseless originality could turn too many grapes sour (read: Ep1 and Ep3), a balance of the old diehards from the 3 key flicks, and some of the prequels, was needed. 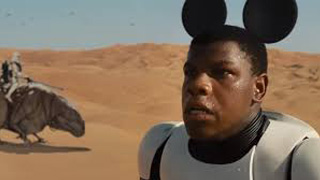 Too Disneyfied? I’ll give you a hint. The mouse ears are not in Force Awakens.
From TechBlog: https://www.techeblog.com/index.php/tech-gadget/5-funny-star-wars-the-force-awakens-trailer-parodies

Thus, this new installment needed to take into account several factors, including appealing to a new generation (to the business-minded stock-holders in Disney a very important point), and assuaging the fears of multitudes of fans worried about a return to the Ep1 to Ep3 sub-par offerings.

So Did It Work?

Trying to appeal to a new generation (that should be a plural, actually), yes, enough new elements were introduced, and done so in such a way as to not be tiring, overplayed or annoying to allow not only countless opportunities for action figures and spin-off merchandise, but to allow viewers to want engagement with the juggernaut that is Star Wars.

In the effort to appeal to fans such as myself, I would like to quote CultureMap.

The film smartly waits a while to introduce any old characters, establishing the new characters’ bona fides so that they earn the right to meet Han Solo and others. In so doing, no part of the narrative ever feels forced; everything falls into place neatly, as if all of the characters always belonged together.[iv]

In fact, I was enjoying the new plot to the point where Solo and Chewy’s intro was a wonderfully manipulative surprise.

And, quite frankly, and with no apologies, I loved it. Is it as good as Empire (Ep5)? No, but then again, what film is? It is, however, on par with Ep4, to me, and also reminiscent most of Ep4 and Ep5. If you’re going to do a throwback, do so from the very best.

There is much to enjoy here. The smooth plot flow has a warm, natural feel, dissimilar to the clichéd meanderings from tired plot point to artificial construct in Ep1-Ep3. The mini plots within, including a strange and violent creature Solo and Chewy are smuggling which (of course) escapes, allow the proper characters to show bravery (Rey) and luck (Finn). In the Ep1-Ep3 world, such ploys were played to the audience with insulting plasticity. Here they serve the story well.

Subtle, delicate details abound. When our intrepid gang approach the cantina belonging to Maz Kanata, dozens of flags drape a large area above the transom, including faint reminiscences of flags from the Expanded Universe, the Clone Wars animated series, the video games and more. Smooth. Smooth indeed.

If you’re a purist, such as myself, no coarse words need be exchanged. Enjoy, you shall.

And perhaps the best aspect should not even be stated, and I do apologize for annoying you with this reminder, but The Force Awakens has not even a hint of Jar Jar Binks. Sorry. Had to say it. Pheww. . .

As an addendum to my recommendation, in another post I will discuss the impossible physics of the franchise.

I have noticed two continuity mistakes, and I probably would have noticed more, however my too-close-proximity IMAX 3-D viewing (twice on opening morning, how sad is that?) prevented more.   Surprisingly(?) one is with Daniel Craig, yes, James Blonde 007, playing the stormtrooper manipulated by Ren.

Several complimentary spin-off projects are in the works; movies to be released in the next several years, ensuring the legends will entertain the fantasy-prone masses for decades to come. The first is Rogue One, which will tell the story of the Rebel Alliance stealing the original plans for Death Star I, thus set between the events of Ep3 and Ep4. Release is set for December, 2016.

A young Han Solo film, set for release in mid 2018, is in pre-production.

Rumored for 2020, a Boba Fett flick is also in pre-pre-production.

These 3 are extensions to the Episodes, side projects which explore smaller plotlines untouched in the existing franchise, some of which will touch on plots encountered in the authorized expanded universe[v] genre.   As certain as a warm summer day in Houston, I will be at the ready, Star Wars-themed Target Visa Card in hand, the moment tickets become available online. And I will, once again, happily submit myself to the sucker list for merchandising.

However, for now, the day has been long, and my excitement fades as sleep draws near. I will splinter off to the bedroom, tiredly shuffling my feet in Chewbacca slippers to lay my head on Millennium Falcon pillowcases.  Tonight, I look forward to light saber battles and X-wing flyers dancing serene visions in my mind’s eye.[vi]

[vi] Please tell me someone caught the reference.