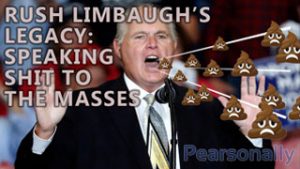 A broadcaster acquaintance of mine used to say, and have on his old Website the maxim “A different world is possible”1. A variant form, related by a character in Carl Sagan’s sci-fi book and movie Contact — in response to an admission of unfairness — states a mind-numbing truism: “The world is what we make of it”.

And now, the world is a better place.

I know I will be called terrible ad hominin things for saying this.  And I don’t give a fuck.  But IMHO, the recent death of one of the most horrid and horrible humans to have ever shared the beauty of our planet is now dead, and this makes the world a tiny little bit of a better place.

Rush Limbaugh, born Jan 12, 1951, died today at the age of 70. And we should lament not his passing, but the damage to our world, our political system, and his part in pushing America toward it’s putrid descent into the decrepit political and media landscapes which led to the rise of Trumpublicanism.

Listen closely.  Can’t you hear it? The birds are a little chirpier, the flowers bloomed today with a little more chromatic vibrancy, and the sun’s tepid rays hug us all in the warm love of the natural world Rush Limbaugh loathed his entire poisonous plutocratic life.

His own mother said of him, “he flunked everything”.  Of course, being a college dropout (which he used as an insult against those he didn’t like in one of his plethora of examples of ultimate hypocrisy) doesn’t mean he couldn’t be called a success in his chosen line of work.  Steve Jobs, Bill Gates, Ellen DeGeneres (whom he called Ellen Degenerate because she has the gall to be a lesbian), Oprah Winfrey, James Cameron, and Mark Zuckerberg are all college dropouts.  And Rush certainly has made a shitload of money, being worth over one half of a billion dollar$.

He did this by helping to plunge a large percentage of the already credulous American public into the anti-intellectual, anti-scientific, anti-critical-thinking far-Reich wing of the Fuckublican Party. He helped to coalesce his “ditto”-head sheep into politically audacious stances which opposed positive-leaning and progressive legislation and eventually helped (s)elect the narcissistic, lying, cheating, xenophobic, failed multiple bankruptcy-filing real estate developer Donald J. Trump into the second most powerful office on the planet2.

America and the world will never be the same because of the damage to our institutions caused by Limbaugh and his “ditto”-headed minions.  These authority worshiping, follow-the-leader-mentality, un-thinking and unsophisticated marks turned their radio dials to his broadcast money machine day after day for years, leading to other noxious voices gaining their respective audiences as well, such as Alex Jones.

People can be Republican.  That is okay in and of itself.  But his nastiness, his branding and pushing of the normalization of extremist Fuckublican ideas without fairness, without any semblance of critical information and balance, without listening or learning, led many otherwise good people to follow and push otherwise horrid policy agendas.

Of course, I count one of the great merits of the American way of life the First Amendment to our Constitution.  I support his right to horrid discourse.  However, it must be seen that he eagerly did so in a way befitting of the Reaganesque destruction of the “Fairness Doctrine” in media broadcasting (which was only fair because by law the broadcast radio and television signal band belongs to all Americans — it drastically needs to be reversed).  After the Reagan administration’s elimination of the Doctrine, he could limit the people he spoke with, disallow opposing points of view and he certainly didn’t do interviews with anyone who might challenge his ideas.  This leads me to a truly alarming question in the post-Trump era: Why is it those with the biggest mouth have the thinnest skin?

I was on the Rush Limbaugh show once, during the call-in segment.  I challenged one of his oft-cited views, made him say something on air which surpassed rationality, and despite multiple times reaching the show afterward, not once was I ever again allowed to participate in his radio ramblings.  And this was before spoofing, and cell phones (c. 1988 as I recall).

What was so wrong with his agenda?  What ideas did he promote that make me celebrate his death?  Let me count the ways.  Here is just a infinitesimally tiny sample of his hatred, xenophobia and hypocrisy.

—  Near-constant insulting of minorities:  Let’s see, this must be only a sampling, as we don’t want this post to be the size of Atlas Shrugged (don’t get me started).  From stating all wanted criminal composite drawings look like Jesse Jackson to telling a black caller to “take that bone out of your nose” and blaming what he calls “the welfare state” for the reason blacks don’t generally become Fuckublicans, because — he says — it means they have been trained to hate the United States.  Since most welfare actually goes to white people in ‘Red’ states, this obviously is not true.  Several times he has referred to Mexicans as lazy

—  Racism in motion:  From saying that he cannot enjoy football games because they remind him of a gang war between the Blood and Crypts, it’s obvious he loathes the idea of black people making million$ of dollar$ providing sports entertainment for tens of millions of Americans

—  Racism without history:  One further clue to his cluelessness regarding complexionism (a.k.a. “race”): “If any race of people should NOT have guilt about slavery, it’s Caucasians.”  WTHF?

—  Not exactly a feminist:  He called liberated women “sluts” yet says “I love the women’s movement as long as I’m walking behind it”.  Okay, I agree with him on that one, but I say it because I love women.  To him, they are a form of lesser being

—  Your mamma should smack you:  He, followed years later by DJTrump, maked fun of people with disabilities.  Let’s not forget his mockery of Michael J. Fox’s involuntary movements because of Parkinson’s disease, saying “it’s only an act”.  Disgusting.  Rot in Hades  (Oh, that’s right.  It’s just a myth)

—  Leading to Alex Jones:  He pushed forth several silly conspiracy hypotheses regarding race, saying, for instance, that Democrats push for illegal immigration from Latin America and then discourage them from assimilating, as a way to deliberately control their voting base.  He rails against democracy at every chance, and often cites the Immigration and Nationality Act of 1965 as the beginning of the end for America

—  Even Cons hated him:  Even the normally conservative-leaning The Hill” called Rush “…the worst of America” and illustrated his bile thus: For decades, Rush has been the voice of racism on talk radio. He was Trump before Trump. He mocked candidate Barack Obama as “Barack the Magic Negro.” Along with Trump, he promoted the racist birther theory that Obama wasn’t born in the United States. On July 6, 2010, Limbaugh insisted that Obama was only elected president because he was black. “If Obama weren’t black,” said Trump’s Medal of Freedom winner, “he’d be a tour guide in Honolulu.” Limbaugh also suggested that “The NAACP should have riot rehearsal. They should get a liquor store and practice robberies.”3

— Silly to say the least:  He pushed forth several silly conspiracy hypotheses regarding race, saying, for instance, that Democrats push for illegal immigration from Latin America and then discourage them from assimilating, as a way to deliberately control their voting base. He rails against democracy at every chance, and often cites the Immigration and Nationality Act of 1965 as the beginning of the end for America

— Presidential pet misname:  He called then 12 year old Chelsea Clinton, during her dad’s Presidency, the White House dog. If that makes you laugh, then please go take a serious look in the mirror.

— Not the news:  In the early 90s, before he started loosing sponsors because of it, his “AIDS updates” were only about making fun of people who were sick of HIV/AIDS or who had died of it.

— Ultimate hypocrisy:  Whenever speaking about people he knew or suspected were consumers of Cannabis (a.k.a. marijuana), he would preface it “long-haired, stinking, maggot-infested hippy”. He was ardently for the drug war, which ruined millions of lives just for liking flowers, but he didn’t care. It’s okay to lock up and throw away the key on someone who grew a plant in the presumed privacy of their home, but his addiction to OxyContin? “It’s legal” so it’s okay, even though his addiction landed one of his assistants in jail and led to such hearing loss he needed 2 cochlear hearing aids. There is a special, bottom rung level of Hades for such hypocrites, and if my Atheism is ultimately wrong and he’s burning, I hope his pal Adolf Hitler is his blistering bunker budy

— Justified slavery:  “I mean, let’s face it, we didn’t have slavery in this country for over 100 years because it was a bad thing. Quite the opposite: slavery built the South. I’m not saying we should bring it back; I’m just saying it had its merits. For one thing, the streets were safer after dark.”4

— Teary-eyed for the person who murdered Dr Martin Luther King Jr:  “You know who deserves a posthumous Medal of Honor? James Earl Ray. We miss you, James. Godspeed.”5

Should I stop now?

Yes, I will, only because if you want a real tableau of insight into this thankfully dead mound of manteca de cerdo, I suggest Al Franken’s book Rush Limbaugh Is A Big Fat Idiot And Other Observations.