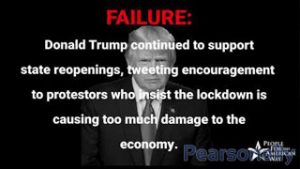 A profile of America’s greatest conman. By Keith Baldwin

Elected to the presidency of the United States—against the popular will of the voting public—by a vestige of America’s history as a nation fueled by slavery, he has declared himself “the least racist person there is anywhere in the world.”

Despite this apparent obstacle, Trump has managed to win over an overwhelming majority of America’s thriving racist community by surrounding himself with white supremacists, refusing to condemn hate groups, dog whistling so loudly Old Yeller can hear it, and putting young children in concentration camps for months while prosecuting their parents for committing a misdemeanor.

Known for his catchphrases, “You’re fired!” and “When you’re a star, they let you do it,” Trump first captured the attention of federal investigators in 1973 for systemic discrimination against Black prospective tenants at one of his housing developments. Under noted bleeding-heart liberal Richard Nixon, the Justice Department sued Trump and his father for refusing to rent to Black Tenants.

Since that early highlight, Donald Trump has gone on to have an impressive career as the target of numerous federal investigations for everything from tax evasion to insurance fraud to running a sham “university” and (possibly) colluding with a foreign power to undermine American “democracy.”

Having inherited a huge portion of his wealth from his real estate mogul father—a sum dramatically increased by dodging estate taxes—the money Donald Trump has “earned” has been based mostly on his reputation as a famous rich guy.

It’s that reputation as a brash “billionaire” who can turn s**t to gold that has allowed him to repeatedly turn gold to s**t, accruing numerous bankruptcies, endless scandals, and unfathomable levels of debt, all while building lifelong ties to organized crime, global oligarchs, and the shadiest figures in American politics—from Roy Cohn to Roger Stone.

But, perhaps most importantly, that reputation earned Trump opportunities for media attention, which he craves above all else. That’s how he ended up with a place in the WWE hall of fame, a cameo appearance in Home Alone 2: Lost in New York, and a starring role as Biff Tannen in Back to the Future Part II [citation needed].

It’s how Donald Trump ended up with his own reality show, where editors worked tirelessly to add an air of business competence to his rich assh**e mystique. And it’s why in 2011—amid calls for the government to be “run like a business”—anyone cared to listen to “businessman” Donald Trump’s baseless, racist suggestion that Barack Obama wasn’t really born in Hawaii.

And it was that birther ordeal that led inevitably to Trump’s ascension as a political figure, to the Trump presidency, and to the apocalypse circling overhead as America’s pathetic, depleted husk crawls further into the lifeless expanse of the future.

Among Trump’s most notable life achievements, apart from becoming the most powerful manchild on Earth, are his failed casino ventures—including the spectacular financial collapse of Trump Taj Mahal—and his charity foundation that was shut down for illegal misuse of funds.

He also has some real estate ventures that involve plastering his name on buildings…until the actual owners decide it’s too embarrassing.

Trump was raised by his father, Fred Trump, to believe that there were two kinds of people in the world: killers and losers. Despite a lifetime of losing business ventures, disappointing children (with the exception of Ivanka, whom he repeatedly “jokes” about wanting to sleep with), and failed tabloid marriages, Donald Trump finally secured his position as a killer in his 70s by spreading confusion and misinformation about the deadly novel coronavirus pandemic while failing to take necessary precautions, thus contributing to the deaths of tens of thousands of Americans.

As a child, Donald Trump was instructed in “Christianity” by pastor Norman Vincent Peale, who preached that wealth and success are signs of God’s love, and both can be achieved through positive thinking. Donald Trump has held onto this idea by banishing negative thoughts like, “You are unqualified,” “You don’t know what you’re talking about,” and, “You’re not the only person in the world who matters.”

As an adult, Donald Trump extended this absence of doubt and self-criticism to his romantic life by not allowing himself to be constrained by vows of commitment, a lack of consent, or basic human decency. In the case of his first wife, Ivana, Donald Trump deliberately spread tabloid stories about his affair with a younger woman (future ex-wife Marla Maples), and—according to Ivana Trump’s own court testimony—once raped her as an act of vengeance after an unpleasant experience with a scalp surgery intended to conceal his baldness.

In addition to dozens of other accusations of sexual misconduct—from unwanted kissing to further allegations of rape—Donald Trump reportedly had affairs with adult film star Stormy Daniels while his third wife, Melania Trump, was pregnant with their son, Barron Trump, and with Playboy model Karen McDougal shortly after Melania gave birth. Donald Trump is also the preferred candidate of Christian, “family values” voters.

The evidence is inconclusive as to whether Donald Trump did in fact have multiple women in his hotel room that night—and instructed them to pee on a mattress that the Obamas slept on during a state visit.

It is also unclear whether Donald Trump—who was actively assisted in 2016 by a Russian disinformation effort and who openly asked Russia to perform a cyberattack against Hillary Clinton’s presidential campaign—is actually subject to the whims of his good friend Vladimir Putin, with whom Trump loves to have private meetings.

We may never know if the Russian government is using compromising materials—possibly including a tape of sex workers peeing on a mattress at Trump’s behest—to gain leverage over Trump in order to receive a startling series of foreign policy wins.

By contrast, there’s a ton of damning evidence that Trump and his associates are tied up in international money laundering schemes involving oligarchs from Russia and elsewhere.

In September of 2020 it was revealed that Donald Trump paid just $750 in income tax in both 2016 and 2017, while claiming jaw-dropping deductions such as $70,000 for hair styling. But as Donald Trump put it in a 2016 debate, when Hillary Clinton confronted him about his tax evasion, “That makes me smart.” Less indicative of intelligence are the loans that have him on the hook for over a billion dollars to various international banks who therefore have substantial power to influence the American government.

In October of 2020 Donald Trump was diagnosed with COVID-19 in an event that was lauded by Popdust.com as “maybe the purest example of karma ever.”

Many predicted that Donald Trump was at particular risk from the disease—and was placed on supplemental oxygen as well as an aggressive regime of experimental medicines, suggesting a severe case. However, he soon addressed his supporters—claiming that he was feeling “better than I did 20 years ago,” and was not contagious—and said of the virus, “Don’t let it dominate your life.”

Reports vary as to whether Trump then added, “Do not, my friends, become addicted to Oxygen. It will take hold of you, and you will resent its absence!”

Donald Trump is running for reelection against Democratic candidate Joe Biden, and considering the resources available to cheat and suppress the vote—and the likelihood that he will face prosecution if he loses—it remains a distinct possibility that he will defy the polls and win.

If he succeeds, opportunities to avert climate disaster or revive any semblance of democracy in America are likely to never return.