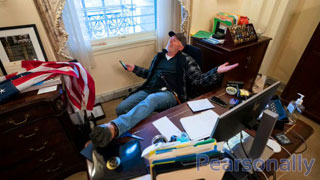 During the 2016 Presidential campaign, it was clear that one of the candidates for president from the Republican Party was becoming a magnet for the worst of America.  At campaign rallies for failed real estate mogul-cum-reality show host Donald J. Trump, we saw rallies with flags representing breakaway states that fought to continue the chained slavery of human beings, fights and mob-style beatings of minority attendees, the development and use of coded dog whistle words, and the gathering of uncritical mobs of people willing to swallow whatever lies and disgusting hatreds their authority figure would feed them.

Regarding the worst of America, the candidate for the Democratic Party slipped into the very same demagoguery she detested — as all Americans should have detested — when she called the worst of the worst of the coalescing Trumpublicans the “basket of deplorables”.  Upon later reflection, she admitted it was a rare lapse in judgement and apologized.  Yet on the other side of the political aisle, Trumpublicans regurgitated a continual barrage of insults against anyone who did not follow, agree or cover them and their Chosen Leader in a favorable way.  The media became “the enemy of the people”, even “the Fake News Media”, and legitimate journalists as “fake newsers” as Trump failed to acknowledge the horrors or consequences.

And later, in August of 2018, the FBI arrested Robert Chain, who made 14 calls to The Boston Globe threatening their journalists, saying he was going to “shoot them in the head” while calling them the “enemy of the people”.  This was just a few weeks after Jarrod Ramos used his 12-gauge Mossberg 500 pump-action shotgun to kill 5 of the 7 journalists he shot.  Letters to newspapers and Tweets, Facebook posts and callers on right-wing media called for the public lynching of journalists who didn’t “treat [Donald Trump] fairly”, supposedly meaning not being critical or reporting on the horrible things he said and did.

Where I grew up, in southwest Detroit, I could see from my bedroom window the enormous Ford Motor Company Rouge Complex, one of the largest factories in the world, in Dearborn, 3 kilometers across the serenity of the historic Woodmere Cemetery in the eerie distance. Between the cemetery and the pulsing behemoth was a Moslem Mosque, one of the religious centers of the community, and part of the largest concentration of Muslims outside the Middle East.  Growing up with Muslim friends, I knew Muslims as peaceful and loving family people whose charity and forgiveness knew no bounds. 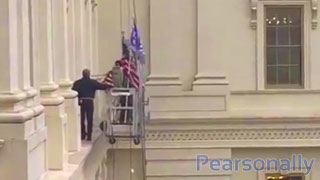 Yet in Manichean dichotomies, there must always be an enemy.  And people who are persuaded more by emotion than by thought are prone to easy outrage.  The Party of Trump called Muslims and Islam “retched”, “degenerate”, “terrorists”, “suspicious”, and unthinkingly repeated such standby buzz phrases as “Islamic supremacism” and “sharia law”.  At a Sept., 2015 campaign rally, he pledged to kick all Syrian refugees out of the country should he be elected (which elicited riotous applause), and a month later on Fox news entertained the idea of closing mosques in the United States, a policy assurance he repeated a month later.  Trump the candidate promised he would implement a “Muslim ban” and talked about establishing a database registry for Muslims in the U.S., and even repeated an entirely debunked “poll” from the far-right anti-Muslim think tank Center for Security Policy that 25% of Muslim Americans favored violence against Americans as part of a global jihad (no such poll ever took place).  On Dec. 13 he said, regarding a specific Muslim businessman, “There’s a sickness going on.  There’s a group of people that is very sick”.  During his presidency, Trump retweeted far-right anti-Muslim videos from hate groups, and anti-immigrant activists, even from Europe.  One video called the attacker of a disabled man a “Muslim migrant”, yet the attacker was “born and raised in the Netherlands” and not a migrant.  In order to justify their rhetoric, dictators must clearly define and label “The Other” as a threat.

In order to justify their rhetoric, dictators must clearly define and label “The Other” as a threat.

Videos from rallies show Trumpublicans calling Muslims “low lifes”, “degenerates” and “drains on the social order”.  In reality, a Pew forum research forum found that “Recent Muslim immigrants to the U.S. and their children tend to be wealthier, on average, than the rest of the population”.

Yet do I need to even state here that between the start of Trump’s political rise and now, anti-Muslim violence, beatings, mosque defacings, vandalization of property and killings of Muslims have dramatically risen?

Why has this happened?

While still a candidate for public office – something he had no experience at or seemed to understand – Donald Trump was asked about accepting the election results in one of his debates with Hillary Clinton.  Moderator Chris Wallace asked twice if he would accept the results of the election.  Both times he responded with vague innuendoes such as “we’ll have to see” and blamed the media — before the fact — and added “I’ll tell you at the time”.  To this, Ms Clinton gave a concise statement on Trump’s character:

TRUMP (interrupting with a finger in the air):  Should’a gotten it. [chuckles]

HILLARY CLINTON (continuing):  this – this is a mindset, this is how Donald thinks, and it’s funny, but it’s also really troubling.  That is not the way our democracy works, we’ve been around for 240 years; we’ve had free and fair elections, we’ve accepted the outcomes when we may not have liked them.  And that must be expected of anyone standing on a debate stage during a general election.  President Obama said the other day said when you’re whining before the game is even finished, it shows you’re not up to doing the job.  And let’s – y’know – let’s be clear about what he is saying and what that means:  He is denigrating, he is talking down our democracy, and I, for one, am appalled that someone who is the nominee of one of our two major parties would take that kind of position.

Whether you did or didn’t like Sec. Clinton, her words rang true from the beginning of Trump’s snowflake campaign of whining and false claims.  The question itself came from Wallace because of Trump’s delirious claims that even before the election Hillary Clinton and her evil cabal of child cannibals had already rigged the upcoming election and were in the process of stealing the election from him.  Yes, stealing it from him, even though the election hadn’t even yet happened.  Sec. Clinton, as we all know, received 3 million more votes, and no, it was not because, as Trump claimed, 3 million “illegals” voted illegally in California.

Throughout the whole campaign the failed real estate mogul who mismanaged 3 casinos into bankruptcy (! Let that sink in for you) and through his presidential campaign has acted, to quote journalist Tim Miller, as “a whiner who specializes in phony outrage” and “a pampered millennial child who can’t handle losing and wants a participation trophy.”

. . . people who are persuaded more by emotion than by thought are prone to easy outrage

Just a few weeks before the actual election of Nov 8, 2016, he brought up the growing presence from reporters and pundits from even his own party about accepting the results.  On Oct. 20 at a campaign rally, he said “I will totally accept the results … if I win.”  Along with an absolute unwillingness to accept the results, his fanning of the flames had become manifest, and throughout the entire term of his office, tinder would be added slowly, like the laggard zesting of a dried forest.

Destroyed families so he could rile up his crowd with stories about Muslims?  Just grist for the mill, collateral damage.  Minorities were fair game in his personal quest for power, while consequences be damned.  America’s lax response to the Covid pandemic?  He says he didn’t want to start a panic, but as of right now over 300,000 dead American are fine, otherwise he might look bad.  Daniel Tate described the disasters which always seem to follow in the wake of this Mad King-wannabe:

Trump did not create the broken information ecosystem that led the country toward the Wednesday calamity. It was clear prior to his presidency that years of baloney from radio talkers, Fox News hosts, chain emailers, message board posters and social media personalities had poisoned the political brains of millions of Republican voters.
But in the four years I’ve been debunking his lies, the man who launched his Republican career on a racist lie about President Barack Obama has made the problem so much worse. He has lied with astonishing frequency in office, making presidential dishonesty such a normal occurrence that it has usually not been treated as news. He has done so while steering his supporters away from truth-telling information sources and toward the least trustworthy outlets, actively fostering a climate in which his lies get rewarded and reinforced.1 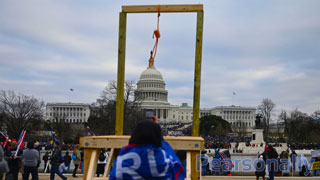 Several protesters, after violently breaking into the Capitol, yelled “Where’s Pence?” and chanted “Hang Mike Pence”. Their aim? To hang the VP for his supposed crimes against Trump for not overturning the legitimate results of the 2020 election. Image WOP https://www.rollingstone.com/culture/culture-pictures/us-capitol-hill-mob-maga-trump-1110628/us-politics-election-trump-5/

Yesterday’s post-rally mob which violently burst into the United States Capitol Building was something I knew could be expected when haphazard slogans and petro pissing on the tinderbox crowd of deluded loyalists became further enraged by rhetoric.

Trump was the last speaker at the “Save America” rally on The Ellipse, in front of the White House, sacerdotal land which is supposed to belong to ‘we the people’.  Several right-wing media darlings who railed against the “stealing of your rights” and “unfairness” and a “stolen election” whipped up a crowd to believe the purloined referendum wasn’t Donald J. Trumps; It was theirs.  Theirs, with the subtle, stealthy secret invocation to take it back.  Theirs, if only they had the cajones to take it.  There, just a klick away, that way, down The Mall, where the ballots were being tallied to take away their birthright.

Standing safely behind thick plexiglass shielding, Trump informed the roaring deplorables “We’re gonna walk down to the Capitol and we’re gonna cheer on our brave Congressmen and -Women, and we’re probably not gonna be cheering so much for some of them.  [tone shifts to a slow, steady and firm voice] Because you’ll never take back our country with weakness.  You have to show strength and you have to be strong.”  Trump informed his proselytes to “fight” for him. He continued “You don’t concede when there’s theft involved. Our country has had enough and we will not take it any more  . . . . And we fight. We fight like hell and if you don’t fight like hell, you’re not going to have a country anymore.”

After the violence, which included over 3 dozen Capitol police officers being wounded, and 4 dead Americans, as well as the largest attack on American democracy in it’s long and labored history, what did The Don say?  “These are the things and events that happen.”

Voltaire, wise with words, with epochal elegance, penned the phrase “Anyone who can make you believe absurdities has the power to make you commit injustices.”

There are no words for what happened yesterday at the United States Capitol.

One radio pundit stated he believes the country will shift, molasses like, to become more inclusive, less given to impulse, more tolerant, enabled with a toned down rhetorical temperature.  He predicts that in 10 years, very few people who today admit to being loyal Trump supporters will admit to such a thing.

The fact that it could take so long is, itself, utterly deplorable.