“Not a Sequel, Not a Prequel, but an Equal”

a review of 10 Cloverfield Lane 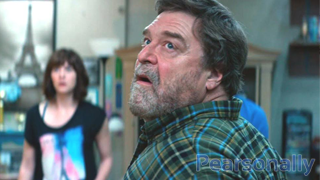 How Did We Come To This?

Wunderkind movie producer/director J. J. Abrams, like so many of us with ADD, was influenced, it seems, by minutiae. While in a toy store in Japan, he thought “We saw all these Godzilla toys . . . we need our own American monster, and not like King Kong. I love King Kong. King Kong is adorable. And Godzilla is a charming monster. We love Godzilla. But I wanted something that was just insane and intense.”

This quote, directly from J. J. Abrams, makes me wonder one thing: why, in an 85 minute movie, do we see so damn little of the monster in the outcome movie, Cloverfield?

Once the box office and critical returns from that talkie came in, plans for sequels and/or franchising became cemented, and our first outcome has the Cloverfield cognomen, without the distant, impersonal and dizzying cinéma vérité.  Thankfully.  In stark contrast, 10 Cloverfield Lane is in-your-face, personal, and steady.  It lingers on tiny moments of angst and uncertainty painted across our character’s faces in times of strange momentum. Where the original is macro, this follow-up is micro. Where we don’t see many close facial reactions in one, in the other, we become absorbed in the uncertainties and indecision of both our protagonists and our antagonists.

This begins with flash shots of our lead character Michelle, in her apartment making a decision, while New Orleans’ bridges spanning the Mississippi loom in the background. We feel like she made the decision to cross that bridge, and is literally holding the baggage which accompanies it.  Back and forth we see her, jumpily grabbing valuables (like a bottle of scotch, so she already has my sympathy).  She then hits the road. We never do know truly why, but she has broken up with her boyfriend, and is apparently off to a safe haven, driving north through the boring Louisiana prairie. She is somehow run off the road, and wakes up, chained to the wall of a windowless cement room dressed in little more than her unmentionables. The man who apparently re-set her broken knee, yet stripped her down and chained her, makes an appearance, and questions and innuendos abound. Is her captor, Howard, really a captor? Did he save her life or cause her maladies? Is he a perv or just helpful? Is he brilliant or just intensely loony?

As the plot draws out and develops, character ideas about Howard’s honesty and intentions are both dispelled and confirmed. The other resident of the bunker, who apparently is a local yokel having helped Howard build the doomsday retreat, works both against and with Michelle in intriguing subplots.

And just like a strip club, you know there’s gonna be a big ole’ ‘but’ somewhere.

Am I Just TOO Persnickety?

Though below you will find my final review rating, I must say I found a few problems. Yes, I AM one of those vidiots who nitpick. The lock problem below, for instance, actually made me think overnight, so I went back to the Blu-ray and double checked for the inconsistency, before reporting it here and returning the disc to Redbox.

Do you agree or disagree? Lemme know.

-> Howard has obviously thought out an incredible bunker, with contingencies planned for and systems built with sophistication. So why in the world would he let pass the only possible access to re-start the air recycling system be reachable only by someone ¼ his plump size? What if the kid who helped him build it died with the catastrophe outside, or if his only bunker-mate was as wide as him, or even if he were alone? He, quite simply, would meet a dead end in an airtight underground bunker-casket.

-> When Michelle does crawl through the air ducts to the small room where she is able to reset the air system, there is a previously un-discussed ladder leading to a hatch to the outside. See pic 1. This is the lock as we get to know it at this time, hanging loosely on a big round bar, not really holding anything at all. Now see pic 2. Here is the best show we get of the very same lock as it is about to be smashed. In pic 1, you see that it holds together nothing. We get the impression that lifting up the hatch about 10 cm is possible, maybe even enough to let in the implied airborne toxin. When she whacks the lock, it even looks like it’s not hanging very loose on a metal rod. It moves, but with rigidity, as if through the eyeholes of a proper locking mechanism.

-> When Michelle gets to the same small room, she notices – and the camera briefly lingers on – an envelope addressed to Howard. Having shown a willingness to know as much as possible about her captor, why she doesn’t show the faintest interest in the envelope with her captor’s name on it, or what may or may not be inside (remember, he cannot access this space), is beyond me.

-> Howard has concocted his own “vodka”, which is obviously of the rotgut variety, given Michelle’s reaction, and his admission. Yet he left Michelle’s bottle of scotch in his pickup, after taking the trouble to switch it from her crashed car first. Now I am not known to be too unreasonable, so I grant that Howard may have thrown her over his shoulder, taken Michelle to the bunker with the box of belongings, and decided not to go back for the scotch, given the uncertainties of the “whatever” that was supposedly happening outside. But still, dude, how do you leave behind scotch? I know that I, for one, simply cannot do that.

-> One more thing. And it’s an arguable point; the upper distilling limit for alcohol in scotch is 94.8% by volume, or 189.6 proof by American proof standards. Even this extreme limit is not the proof or alcohol percentage of the type of scotch Michelle was liberating from the apartment at the beginning of the show. Yet the bottle exploded . . . and I do mean it fucking E X P L O D E D . . . when the makeshift Molotov cocktail she tossed in the maw of the biomechaniship [no, you won’t find that word in the OED] broke open. As a person who has built many a Dewer’s Molotov cocktail bottle bombs, I will tell you that the burning is one thing. Yet even with a roughly 60/40 mixture of nitromethane and methanol and a closed port (the bottle has to be wrapped, not wicked) the explosion which does ensue is nowhere near her $ 45 bottle’s impact on the alien gullet. And, yes, I do speak from experience.

-> OK, OK, so maybe it’s 6 issues I have with the movie. Sue me. Michelle gets in Howard’s pickup, and before she can close the door, the ground-crawling creature gets partially in the car with her and attaches its round lamprey-like suckers to her impromptu mask. She has the keys in her hand, and doesn’t use the key between her fingers to fight off an invader?

In addition, commentators with the Youtube channel CinemaSins point out 2 more stinkers. Howard’s huge Michelle-delivered bash on the forehead, which needed stitches, and her own car crash face scars, are healed just after the 1/2-way point of the show.  Yet the left arm of Emmett (another cellar dweller) is still unhealed – supposedly many weeks into the ordeal. This provides almost a too-lame reason Michelle must crawl through the air ducts. Also, when the perchloric acid rips through the bunker and Howard falls into it, he does so face-down, yet when he blocks her way a few moments later, only the right side of his face is burned.

Besides, why does the tender Howard (John Goodman, perfect for the role) all of a sudden fight hard against anyone leaving?  He realizes he only has finite resources, yet for some reason has the space for 55-gallon drums of perchloric acid.

Certainly, most viewers of the first movie in the loosely-related Cloverfield Franshise (yes, that’s capitalized, because it’s a thing now), 2008’s Cloverfield, have to ask “How are they related?”

Well, barely, kinda’. However, on close examination, much more than we suspected.

[one day I will continue this topic]