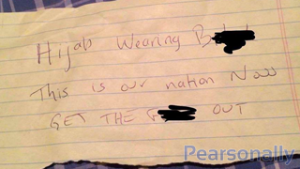 On Sunday, July 14, 2019, the person with the highest position in the world stooped to one of the lowest positions in the world: telling his opposition in Congress to [paraphrasing] ‘go back to their countries’. This hate-filled trope has been a common racist call – originally leveled at the Irish, Jewish, Italian and even African-descended immigrants – for over a century. Members of my family used to use it in regards to the Mexican-descended family across the street, despite being model citizens and neighbors and being entirely born here in the US. The same call was leveled against Muslims (even if they were born here) after 9/11.

The @DocumentHate database at ProPublica tells us that “we’ve been documenting hate incidents using tips from the public. It turns out that “go back to your country” or “go back to [X] country” is one of the most common phrases we’ve identified”1 they stated in a recent tweet. When such racist speech is used by POTUS, white nationalists and their sympathetic fray are emboldened. The Southern Poverty Law Center has documented hundreds of uses of such language in their research2.

Yet, despite the outrage, despite the obvious use by the POTUS of very well known and well documented hate speech and racist language, he is doubling down. At his July 17 rally in North Carolina, when he mentioned one of the 3 Congresswomen by name, Representative Ilhan Omar, the crowd chanted “Send her back” in repetitious momentum for 14 seconds while POTUS stood back and let it happen. It doesn’t matter that Rep. Omar was brought here when she was only 8 years of age and has been a U.S. citizen since her childhood, it doesn’t matter to racist ideologists that Rep. Omar was elected by U.S. citizens to be their representative in Congress, the point is clear: Oppose the policies the (p)Resident puts forth (which apparently to him is equal to patriotism) or get called out in the most despicable way.

What does this all mean to the U.S., and what does that mean about us?  That was the source of a nice discussion with great point this morning on CBS This Morning.  The after POTUS’ Tweets, Gail King had interviewed the 4 Congresswomen which were at the center of POTUS’ racist rant.  You can view the interview here: 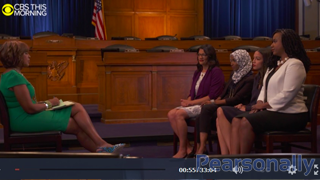 Then, yesterday, covering the recent controversies, Major Garret’s comments were prescient.  You can see the back and forth discussion in the YouTube link below, or just see the points highlighted in the transcript below:

In case you don’t want to see the clip (6 mins.), I have transcribed it here, and highlighted what I consider to be the relevant points via the CBS News reporter Major Garrett.

ANTHONY MASON:  President Trump is using attacks on the female Congresswomen known as The Squad to fire up his supporters.  He called out the 4 lawmakers of color by name at a campaign rally last night in North Carolina, that drew raucous applause from the crowd, and a chant based on the President’s racist Tweet.

PRESIDENT TRUMP CLIP SPEAKING AT RALLY: Tonight I have a suggestion for the hate-filled extremists who are constantly trying to tear our country down they never have anything good to say.  That’s why I say “hey, if they don’t like it let ‘em leave let ‘em leave”.  [edit in segment] Omar has a history [this is when the crowd begins softly with the chant of “send her back”] of launching vicious anti-Semitic screeds.  [crowd gets louder with chant of “send her back” as T stands by letting it happen, clipped here, but 14 seconds in reality]

GAIL KING:  You can hear it there the crowd chanting “send her back”.  We’re talking about Congresswoman Ilhan Omar, she was born in Somalia but she is an American citizen, she has lived here since she was a young teenager.  Omar responded on Twitter with a picture of her in Congress and wrote this: “I am where I belong, at the people’s house and you’re just gonna have to deal with it!” Major Garrett joins us from Washington.  Major, you have seen plenty of these Trump rallies, did the scene last night surprise you?

MAJOR GARRETT:  Well, Gail with you and Tony and Anthony yesterday on the set in New York what did I say?  I said “The President is looking for a replacement for Hillary Clinton”.  Now I didn’t know when I said that hours later there would be a chant coming from a Trump rally reminiscent of the 2016 Hillary Clinton chant “lock her up”, which was “send her back”.  But, this is consistent with this sense – among some Trump supporters – and it’s worth pointing out you can see in the video not every Trump supporters is chanting that; but some do believe that there is a dividing line in America, and that the President is on the Love America/Patriotic side, and those who vehemently disagree with him are not.  Now I’ve been to nearly 80 Trump rallies, I’ve talked to Trump supporters at every single one of them, I’ve spent more than an hour and a half with them at the Orlando re-election rally.  Individually, they present as patriotic, earnest, they love the President, love the country, believe these chants are somewhat in jest and are kind of surprised people get fearful about them.  That is a dividing line in perception and the way politics plays out.  And Trump supporters don’t think they’re doing anything wrong even when they chant like this.  They believe critics of the President are too sensitive and they are the ones who are unhinged; it is the biggest, most visible dividing line in American politics.

GAIL KING: Major, you know, when you’re watching it, I think for a lot of people this is very frightening.  I just want to help … I want … I would like you to help us understand why you can’t disagree with the President without being called un-American.  I just met The Squad the other day, I don’t know them, I never talked to any of them before that interview, and only spent 30 minutes.  Not one of them has ever said “I hate America”.  Not one of them has ever said ”I don’t want to be here”, in fact would say they love this country so much they spoke with such pride about being in Congress they pointed out where they sat in that room, and the bills that they passed and the passion that they have for the county and their people and their constituents.  So for him to say with a big microphone “They hate this country” that just is simply not true.  And it scares me that he is putting that narrative out there.

MAJOR GARRETT:  He’s putting that narrative out there and for the Republican Party which, Gail, has become the Trump party, when the President says “you disagree with me”, he is essentially saying you are doing something un-American.  He regards his supporters as patriots, true American patriots, often times election emails sent to Trump supporters will say “True American Patriots”.   This is one of the things that’s at stake in 2020, ‘what is our definition, nationally, collectively, of what patriotism is or isn’t?’ Is dissent unpatriotic?’  Is that the essential core of the Trump message?  Some Trump supporters actually believe that, others are not exactly sure that, but it is one the the central, I would argue, primal questions in American politics in the 2020 election: ‘What is our definition of ourself?’, ‘What are we comfortable with?’, ‘What are we willing to live with?’

I have friends and family who disagree with the central message I am conveying here, that the current POTUS represents a virile, dangerous trend in politics which seems to be entirely divorced of a historical understanding: the horrors such dangerous rhetoric can create.  The threatening, risky hyperbole which has lead to the beige armband wearing thugs who formed the Brownshirts, the state-sanctioned enforcement arm of the State, which began the round up of Jews in early 1930s Germany (and homosexuals, blacks, gypsies and jazz musicians); and solidified the CPK’s murderous regime in Cambodia; plus dozens of examples, far too many examples history easily provides.

The outrage over these racist Tweets from the Fuckublican Party has been like crickets chirping in an empty theatre.  My own Congressional representative, Rep. Dan Crenshaw (R-TX), did not sign a Congressional disapproval of these nasty statements.  The Republican-led Senate did not even proffer a similar note of disapproval.

Here’s some lyrics from Pink Floyd, represented wonderfully in the underrated classic 1982 film based on the album:

I’ve got some bad news for you sunshine,
Pink isn’t well, he stayed back at the hotel
And they sent us along as a surrogate band
We’re gonna find out where you fans* really stand.

What do you think? Do you support T and his nasty tirades against women of color in Congress? How did your Rep. vote on the resolution to condemn his Tweets? In just the past few days there have been several on-the-street (and in Walmarts, especially, see the links provided) incidents of harassment against darker-skinned people with the “go back” sentiment. Are you comfortable with this? Are you okay with America’s representative to the world so obviously pandering to White Nationalists?