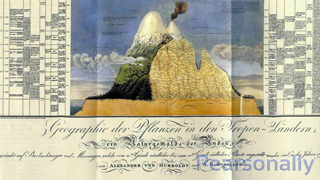 Humboldt’s books were lavishly illustrated. This is a foldout of the “Geography of plants in tropical countries: an image of nature on the Andes” from his most famous work, Le voyage aux régions equinoxiales du Nouveau Continent, fait en 1799–1804 par Alexandre de Humboldt et Aimé Bonpland (Paris, 1807)

Recently I have been re-reading one of the first true old-school scientists I read in my youth.  The writings of Alexander von Humboldt were pointed out to me during my first year of HS, as the then-topical scientist Carl Sagan had released his book Cosmos and the PBS 13-part documentary series “Cosmos: A Personal Voyage”.

Luckily, the librarian engaged me about my interests, and with science and the writings of Carl Sagan being top on my mind, she pointed me to a dusty book also called Kosmos, but written with even more depth than Sagan’s accessible prose, though extreme in detail.  I read most of that old book, knowing it was but a Reader’s Digest style abrogated version of what was originally a 5-volume set.  Despite those 5 volumes being released in roughly the 2 decades between James Polk as the American president and end of the Civil War, as a 15 year old I found the writing marginally dense, but only mildly challenging; while his descriptions of subjects covered Ancient Greek science, Chinese philosophy, modern (for the time) astronomy and cosmography, aerolites, meteorology, botany, verbal arts, Egyptian history and the earliest stages of the developing study of ‘environment’ (a word only coined in 1827).  His writings, I much later discovered, also influenced our understanding of ‘ecology’ (coined in 1875, 16 years after his death, which reading his Personal Narrative of Travels to the Equinoctial Regions of the New Continent lets you know it’s a word he would have embraced).

In many ways he was the most proliferate model of the iconic Renaissance Man — some say the last — of the 19th Century, even eclipsing Robert G. Ingersol’s wide reach.  According to Laura Dassow Walls, the Professor of English at Notre Dame, and author of The Passage to Cosmos: Alexander von Humboldt and the Shaping of America (2011, University of Chicago Press), he was the most well-know person of the time besides Napoleon1.  And while Napoleon was a man of war, von Humboldt was the exemplification of pacifism for his time, chiding the narrow minds of conquest, dominion and colonialism.  Walls tells the story of a meeting with Napoleon where the Emperor sneered at von Humboldt’s collecting of plants, and tells another story where no other than Frederick the Great met with young von Humboldt and his brother Wilhelm, and apparently had hopes of conquest for Alexander in line with the Macedonian general surnamed “the Great”.

Whether either of these stories is true concerns us little.  Maybe only to the same extent and in the same way we know the story of George Washington cutting down the cherry tree is most likely a late fabrication by the admiring Mason Weems2.  Throughout his epic travels and voluminous works, he was a naturalist admirer of the stable order.  Humanity’s encounter on the environment came to him after a long voyage through South America, seeing the impact of Spanish, French and Portuguese neocolonialisms which demanded the extraction of riches and resources from their native land for shipment to Europe.

When forests are destroyed, as they are everywhere in America by the European planters, with an imprudent precipitation, the springs are entirely dried up, or become less abundant. The beds of the rivers remaining dry during a part of the year, are converted into torrents, whenever great rains fall on the heights. The sward and moss disappearing from the brush-wood on the sides of the mountains, the waters falling in rain are no longer impeded in their course: and instead of slowly augmenting the level of the rivers by progressive filtrations, they furrow during heavy showers the sides of the hills, bear down the loose soil, and form those sudden inundations that devastate the country3. 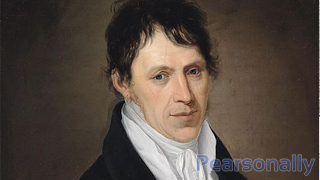 Yesterday marked the 250th birthday of Alexander von Humboldt.  And believe it or not, I’m not the only person celebrating.  The Alexander von Humboldt Stiftung/Foundation4 has “over 29,000 Humboldtians from all disciplines in more than 140 countries worldwide, including 55 Nobel” laureates and “grants more than 700 research fellowships and research awards annually” according to their introductory publication5.  Did you notice that word: “Humboldtian”?  Yes, he’s even his own noun.

Two prolific lecture series, one with his name and another by a naturalist influenced by him, exist to this day in Europe, in Holland and Germany.  Eleven animal species, 17 geographical and meteorological features (from a Pacific Ocean current to a sinkhole in Venezuela), 18 place names, a lunar crater, 2 asteroids, 13 schools and two seagoing vessels all carry the name, in some form, Alexander von Humboldt6.

The 15th Edition of the Encyclopaedia Brittanica7 tells of his time as a Prussian mine inspector; he “supervised all mining activities, invented a safety lamp, and established, with his own funds, a technical school for young miners.”  That safety lamp had a hood which stabilized the lamp flicker and prevented fires from being started if the lamp was knocked over8, potentially saving dozens of lives a year from such disasters.

On September 14, 1869, the naturalist Louis Agassiz stood at a podium in Boston, at a celebration of the 100th birthday of von Humboldt, and proclaimed to the audience

All the fundamental facts of popular education in physical science, beyond the merest elementary instruction, we owe to him. We are reaping daily in every school throughout the broad land, where education is the heritage of the poorest child, the intellectual harvest sown by him.

There is not a text-book of geography, or a school atlas in the hands of our children to-day, which does not bear, however blurred and defaced, the impress of his great mind. But for him our geographies would be mere enumerations of localities and statistics. He first suggested the graphic methods of representing natural phenomena which are now universally adopted. The first geological sections, the first sections across an entire continent, the first averages of climate illustrated by lines, were his. Every school-boy is familiar with his methods now, but he does not know that Humboldt is his teacher…9

That is high praise coming from the 19th Century’s 3rd most important contributor to our understanding of nature.  Agassiz’s crowded 2-hour celebratory oration was attended by East Coast celebrities, men and women of stature, players in the arts, sciences and government, and most notably Oliver Wendell Holmes and Henry Wadsworth Longfellow.  In the nearby Horticultural Hall, the crowd viewed the display of “a palm frond that had rested on Humboldt’s coffin” nearly 10 years earlier10.   In New York City, a mayoral proclamation and formal dinner preceded an official parade and procession to the unveiling, comprised of “not less than 25,000 persons”11, of a celebratory statue.  Still there, in Central Park, it is appropriately situated directly in front of the American Museum of Natural History and what is now the Hayden Planetarium.

So which accomplishments made him so celebrated?  An article in the ‘New Yorker‘ told the facts as simple as can be:

President Ulysses S. Grant attended the revelries in Pittsburgh, and former President Millard Fillmore presided over the ceremony in Buffalo. Similar commemorations were held in Albany, Chicago, Baltimore, Cleveland, Memphis, and San Francisco. Humboldt mania hit Melbourne and Moscow, not to mention Hamburg, Dresden, and Frankfurt. In Berlin—Humboldt’s home town—eighty thousand people showed up to celebrate in the pouring rain.

What, exactly, was all the hoopla about? At a distance of almost a hundred and fifty years, it’s hard to say, not just because Humboldt’s individual triumphs have faded but because there were so many of them[underlining = my emphasis].12

He was praised by Simón Bolívar as “discoverer of the New World”, and credited by Charles Darwin of stirring in him “a burning zeal to add even the most humble contribution to the noble structure of Natural Science”13. Edgar Allen Poe dedicated his final book to the aging globetrotter14.  And the venerable Goethe himself, a friend, wrote “In eight days of reading books, one couldn’t learn as much as what he gives you in an hour”15.

Today, few people know of Humboldt or his massive corpus, legacy and influence, save Humboldtphiles (I made that one up {taking a bow}) such as myself and the thousands of worldwide members, mostly in Europe, of the several societies which carry and disperse his memory and continue his legacy.  Unfortunately, Smithsonian curator Eleanor Jones Harvey missed the sestercentennial celebration with her forthcoming book “Alexander von Humboldt and the United States: Art, Nature, and Culture“, which isn’t due until May of 2020.  Yet recently, the lavishly illustrated children’s and YA book “The Incredible yet True Adventures of Alexander von Humboldt: The Greatest Inventor-Naturalist-Scientist-Explorer Who Ever Lived” by journalist Volker Mehnert and graphic artist Claudia Lieb, was released earlier this year, hoping to expand his legacy to a new generation.  Of the few biographies I’ve had the pleasure of reviewing in the past several years, I found Walls’ work exceptionally accessible and erudite, possessing an almost 21st Century version of Humboldt’s verbal fluidity.  Other recent attempts include Andrea Wulf’s “The Invention of Nature: Alexander von Humboldt’s New World” (2015, Vantage, New York), and next year a major exhibit in D.C. will discuss his influence on the Western Hemisphere.

Today, with anthropogenic climate change bearing its changes to our landscape to a greater degree each year, the inevitable destruction of our ecosystem because of human changes can lead to not just local destruction but global devastation.  Humboldt’s vision warned us on several occasions of the changes made by man disrupting the natural order and creating localized havoc.  If we are to have any sense to our future’s capacity to avert an environmental disruption on a global — possibly eventually catastrophic — scale, let us hope young environmental activists such as Greta Thunberg expand on and elucidate on his dark vision for our pestilential  scraping of the planet’s surface of trees and resources, hoping in the meantime to give our forthcoming generations a habitable planet Alexander von Humboldt would recognize.

The author would like to thank Mary from the Montgomery County Library System and Liz S. from Harvard University Museums for their assistance in verifications for this article

Two starting points for a continued discussion of his legacy: https://www.humansandnature.org/introducing-humboldt-s-cosmos-article-26.php and https://www.biodiversitylibrary.org/bibliography/32462#/summary.

Please let me know what you think of this post by giving your comments below.