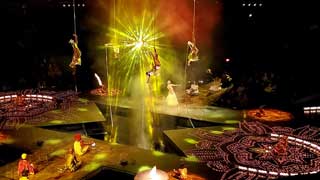 Recently I had the immense pleasure to attend a performance of the Cirque du Soleil show at The Mirage in Las Vegas called LOVE. It is a brilliant and bizarre 90 minute spectacle dedicated to the music and legacy of The Beatles.

I am not a big fan of the circus. I’ve been to circuses, including one called something like the Royal Russian Circus maybe 25 years ago; with dancing bears, elephants walking trunk to tail, clowns so hideous they would make Pennywise shiver from their creepiness, and trapeze artists flying with the greatest of ease over outstretched nets. That is the circus I do not care for. Cirque du Soliel, on the other hand, is different, with talented people taking the place of captive beasts. Conceived between George Harrison and a friend, Guy Laliberte — one of the founding members of Cirque du Soleil — and developed with Ringo Starr, Paul McCartney and the surviving family representatives of John Lennon.  Unfortunately, George passed before the show’s realization.  After a $100 million custom renovation of the old Siegfried & Roy theater, the amazing surroundings include many lifts and trolleys, and an amorphous stage which changes several times during the show, with sections either dropping out, turning into trampolines or even a responsive LED display changing colors when the characters dance to the pulsating music1.

Some of The Beatles’ greatest hits2 are here, and if you are a fan of the Fantabulous Four, you MUST see this show. While certainly centering on the stylings of the late 1960s, with a total of 3 Volkswagons (2 VW Beatles [duh] and a VW Bus), with psychedelic projections and roving displays of nebulous colors suitable for a Jefferson Airplane concert, one act involved double slope ramps on either side of a VW Bus, with vertical trampolines and stands past them, and trampolines to either side3, so 4 performers are rollerblading up and down the ramps, flying over the ramps, bouncing from both horizontal and vertical nets, chillin’ on platforms and even slapping hands in midair. All with the music pulsing through 6,351 speakers in the round theater, floors transforming, projections displaying synchronized energetic imagery and lively dancing in splashy themed accoutrements.

I have a contention, and I know I will be in the minority on this, as it turns one of America’s sacred cows into sliders: I am far more impressed by the athletic and synchronized acrobatics of Cirque du Soleil performers than I am by the popular conception of “athletes” dribbling balls back and forth across a wooden court or tossing pigskins or smacking a pitted ball across a field of green.