Yeah, I haven’t been blogging as much as of late, but I do want to inform my (few) dear readers of the upcoming issue # 7 of my sci-fi/fantasy/horror fanzine, “Microzine”.

During — and for a bit past — high school, I, along mainly with my bud Kevin Colbeck, then later Ray Heikes and Charles Oliver, put together a fanzine, originally titled “Encyclozine“.  You, should you so desire, can read all about it here: https://pearsonally.com/microzine

Well, I am finally getting around to doing another issue, and this time I look forward to utilizing modern technology to make it a reality.  And who knows, I may actually do 1 issue a year until I am no longer above ground.  We’ll see. 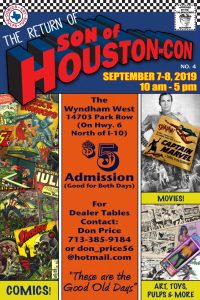 I am excited to be once again going to a sci-fi/comic convention, The Return of The Son Of Houston-Con, held Sept. 7-8. It’s almost 2 decades since I’ve stepped foot in such a gathering, not out of desire, but due to (financial and other forms of) stability. Thankfully, my position at Amazon allows me flexibility and stability, and having met the organizer, am excited for it.

Houston does have a yearly comic-centered convention, however ticket prices are far more than is justifiable when all I would be mainly doing is touring the huckster tables for inexpensive old issues of Famous Monsters of Filmland I do not have, or memorabilia from Space: 1999 (English sci-fi 2-season TV series from the ’70s).

Learning of this con in fact made me commit wholeheartedly to finishing, after several aborted attempts, to making taking up the magazine again, as a place to have my slightly awkward attempts at creativity (see the gatefold of this issue, and no, it’s not (unfortunately) a Playboy style centerfold), and thanks to some referrals by Don Price, the organizer, I’ve been able to snag several local talents into this publication.

I hope you will consider purchasing a copy, either .PDF or a physical printed one. You can do so by going here: https://pearsonally.com/microzine

Recently I’ve added reviews to that section of this site. IM intrested in having others submit movie,  book and television reviews under their name.

Still, after > a month, I am behind on my article on Modi.  Damn, there is just not enough time in the world to cover all of my pursuits.