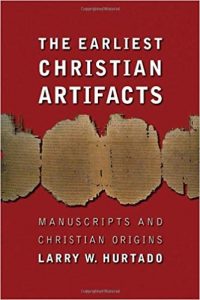 On p. 182 of Hurtado’s 2006 tome on early Christian manuscripts, their fragments, their studies and origins, he writes (regarding “Other Scribal Features”):

“I emphasize that I intend here merely adequate illustration of the phenomena in question, not an exhaustive listing of early biblical codices in which these features appear.”

Should anyone try to criticize this work, it would be the concentration on Egyptian manuscripts and fragments at the detriment of other regions. That is only because Hurtado follows the evidence. Egypt’s dry conditions have led to the discovery of thousands of parchment, vellum and papyrus evidences, especially a plethora of fragments and nearly complete codices in the trash heap at Oxyrhynchus. The study is dolled out fairly, not loosing sight of geographic region, however, but taking us into some of the vaulted archives of early Christianity, allowing us know the jargon and even get a cursory feel for methods of research.

He is here not even concerned much with the earliest of the earliest of the fragments of early Christianity, only with what the mss. and fragments of the first 4 centuries of the CE can tell us about Christians, how they worshiped and used the texts, and about Christianity itself and how it communicated across ideas and distances. Nowhere does he even mention P52 as the earliest known fragment (of John). With calm and evenhanded conveyance of his subject, he adeptly avoids providing bullets to those uber-literary Bible Thumpers who point to P52 as somehow providing proof of the entire Biblical canon. At times I get the feel he is disappointed in these literalists, but thankfully avoids entering the fray.

Chapter 3 is the most interesting. It’s titled “The Nomina Sacra”, a standard in (mostly Anc. Greek) mss. to abbreviate oft-repeating or sacred names/words. Commonly, most people in the Christian-dominated world recognize the Chi-Rho, an X bisecting the vertical stroke of a tall P. Though it is the most recognizable christogram today, it is not the earliest. Hurtado covers an interesting hypothesis that the earliest is actually a combination of a contraction and gematria, using a line over 2 or more Greek letters to make a number, in this case one with reflections back to numbers and words in Jewish writings, emphasizing the Jewishness of early Christianity. He fails, thankfully, to make any final decisions on such points throughout, but studiously offers arguments and counterarguments in a very democratic and yet scholarly manner, even providing alternative arguments, such as their use as visual cues used in finding sections of long mss., or use in devotion.

Throughout he has a running series of footnotes (even the Introduction has 30) where he provides both standard references and amazingly ADHD-scale details on exceedingly minor arguable points and fascinating provisos (I intimate this in a good way). There’s 551 footnotes and they, alone, provide incredibly detailed running narratives in each chapter. You will also find pie charts and bar graphs, an Appendix called “Christian Literary Texts in Manuscripts of the Second and Third Centuries”, and another: “Photographic Plates of Selected Manuscripts”. Included, also, we have suggestions for further readings, select online resources, and a very thorough small-print bibliography 15 pages long (my heart thumps at such things).

If you are an average Christian (or otherwise curious) reader without a standard level of background knowledge relating to the language of manuscript studies, this may be a bit of a difficult read. Should you already know some of the lingo, or you have the time, patience and resources to stop and expand your knowledge every time an unknown or unfamiliar concept comes up, then I can hopeful find this fine book next to Brent Nongbri’s “God’s Library: The Archaeology of the Earliest Christian Manuscripts” (Yale University Press, 2018) side by side in your exegetical library.