Near-Perfect, Lacking in Enough Recipes, but Informative and Helpful 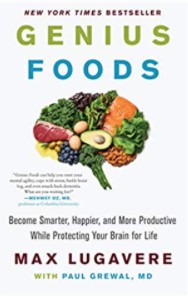 Critical thinkers acknowledge there are far too many nutritional fads and fallacies in the marketplace today. Chief among them are when a product is for sale, or when the purveyor of a product or fad promises to let you in on a “secret” or something which is “hidden” or entices with claims of “they don’t want you to know” about a life-changing fantasy — all for the low, low price of …..

Chief among the dozens of misplaced acceptances by a credulous public is the “alternative medicine” and food crazes. When looking at the cover of Max Lugavere’s Genius Foods: Become Smarter, Happier, and More Productive While Protecting Your Brain for Life (with Paul Grewal, MD)(New York: Harper Wave, 2018; $28.99), one would think it’s chock full of questionable science. Far too many fads and products fall into a category well expressed by Dr Harriet Hall MD:

Throughout the 389 pages of this book, I found several mentions of “science is not settled” about something where Lugavere was unwilling to make foundational claims, and he even places multiple qualifications about the progress of some medical studies into areas touched in the book. He points out the strength of the science he attests to hold to in the introduction with “Science is always unfinished business; it’s a method of finding things out, not an infallible measure of truth.”

His mother, falling into a state of Alzheimer’s/dementia, gave him impetus to worked for years with dozens of medical professionals to put together a book about brain health, because – as he points out throughout this book – brain health is health.

Nearly everyone who would benefit from this book has several questions, including:

— Why do modern diets have “plentiful calories with poor nutrient content and toxic additives”?
— What are the differences between ‘executive function’ and ‘processing speed’ for mental health?
— Why the following: “…it’s not the amount of fat you consume; it’s the type”?
— Why are canola, corn and soybean oils bad news for health and brain health?
— What is the most powerful way to boost neuroprotective hormones, and which food and dietary/life styles work symbiotically to keep you healthier?
— Why is high fructose corn syrup so dangerous?

Throughout, Lugavere does us a favor in the ways he gives verbal but visually-enticing descriptions of the myriad complex processes in the body as it absorbs and breaks down ingested food and uses it at the cellular and molecular level. He works hard to make the reader understand why something is as it is, and to this he does so with near perfection, suffering us with just a few odd metaphors and similes.

In several instances, he discusses in detail a scientific study from such medically peer-reviewed sources as The New England Journal of Medicine, Endocrine-Related Cancer, Neurotherapeutics, Behavioral Pharmacology, Journal of Nutrition, Nature, Science, and Journal of the American Medical Association, among dozens more. It is clear from the numerous references that Max did his homework. While telling you why something is the way it is, or why a certain chemical does what it does, his attempts to also explain “how” lead to one of the few criticisms in reviews; that it is too technical. Well, let me tell those critics that nearly every semi-complex component to the understandings in this book are explained elsewhere in the book, and the index can verify this. Also, has anyone heard of a dictionary or Google? I had only one word I had to look up, and if my patience allowed a few more pages, that search would not have been needed.

Another criticism of the book is one I’ll agree with. Throughout, he discusses an endless plethora of dietary components, and when it comes to the recipe section, there are only 11 entries. An expansion of cross-references would have been helpful, also.

When it comes down to it, I’ll mark this one with a strong 4.5 out of 5, as probably the most informative and engaging book on diet/lifestyle/nutrition I’ve had the pleasure of enjoying. And now it’s time for me to order his follow up book “The Genius Life: Heal your Mind, Strengthen Your Body, and Become Extraordinary”. If it’s as good, it also will prove to be a guide to using the idea of protecting the health of the brain as a way to provide overall health, with sensible and accessible information we can all benefit from knowing.

And soon, by blog will be updated with that review. Stay tuned.