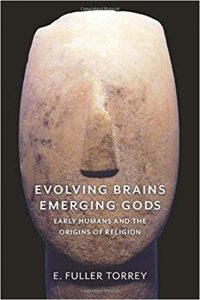 Being an Honorable Mention from the PROSE (Professionalism and Scholarly Excellence of the American Association of Publishers) Award in Biomedicine and Neuroscience in 2018, you can be assured of a good work combining cross disciplinary approaches.  This will not disappoint.  Well, okay, except maybe slightly.

E. Fuller Torrey is a psychiatrist with a prolific carrer, starting several organizations, both professional and social, having authored or co-authored over 200 papers, and with 21 books — most very well received — under his belt.  So here, it should be no surprise that his wide-ranging insights have produced a single volume explanation of the hypothesis that the human mind is the origin and lifelong womb of the ideas associated with higher powers (gods, deities, agents, devils, angels, etc.) and attendant religions and rituals.

His moderately long introduction explains what he is most comfortable with, the human brain.  Beginning with several referencing illustrations and long extractions from other professional works, he sets the basis for the volume to come.  Exploring the different regions and offering an understanding of their differences and evolutionary development, his grounding is firm.  With that, he launches directly into the timeline of human biological and socio-anthropological development, with Chapter 1 covering homo habilis, to Chapter 5, covering homo sapiens sapiens.  Those 5 chapters give an elegant explanation of the differences in brain size and brain density, the differences in neural architecture (“gray matter (neurons) and white matter (glial cells and connecting fibers”), and how such factors as neural folding operate.  Developing a cooperative development index between human complexity and the best modern scientific consensus of contemporaneous neurological and even archaic social changes, he compels a convincing argument connecting multiple realms of data into one compelling read.

Part 2, the last 3 chapters, is titled “The Emergence of the Gods”.  Here, although his familiarity with the material is impressive, I would have liked to recommend he incorporate a bit more of the research into the early proto-human use of symbols, and the latest in neuro-archaeology.  Having added a bit of Alexander Marshack instead of just a passing and almost dismissive mention, and Genevieve von Petzinger’s work would have firmed up the linear approach.  Elaborating on recent advances in separating archaeological digging from post-excavation interpretation may have helped, as well.

As must be, he covers all the major early religious archetypes and does so only cursively, though fits the ritual matter with the grey matter.  In Chapter 7, “Governments and Gods: A Theistic Self”, he does not differentiate between the various several civilizations of Mesopotamia, instead, lumping then under the rubric of “Mesopotamia” instead of their separate, independent and evolutionary independent elements, Sumeria, Akkadia, etc.  Having done so, his points about theistic development and evolution, the changing and even trading of gods, and the expanding role of worship in societies as they struggle and grow, would have been much more solid and reliable.

The biggest problem with this work is one which I do seem to complain about often, a lack of bibliography.  Yes, there are copious and well-formatted notes and references, impressively arranged, and sorted in a manner I would like to see far more often than I do.  Yet a singular bibliography is a useful tool when arranging references to acquire at a later time, instead of doing so in the notes.

When non-theists such as myself are wont to give a short explanation for the irrational human development of the gods, we have always tended to paraphrase Petronius’ “Fear created the first gods”.  In one easily readable volume, Torrey shows it’s a bit more complicated than that, and for anyone willing to join him for a mere 312 pages, they will find out how.